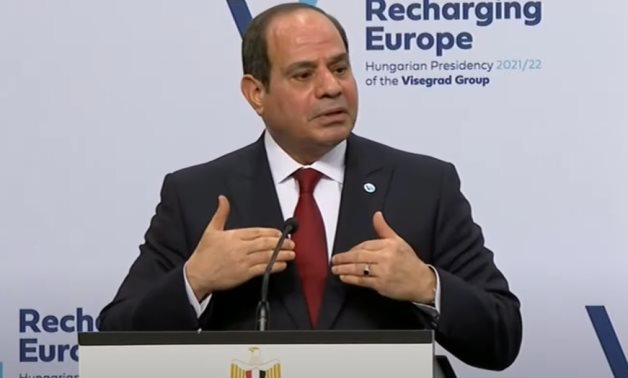 CAIRO – 12 October 2021: President Abdel Fattah el-Sisi called on the Visegrád Group (V4) and other European countries on Tuesday to localize some of their industries in Egypt and to twin their universities with Egyptian ones to assist in the advancement of the country and other developing nations.

Sisi said at the V4-Egypt summit in Hungary that Egypt wants assistance from V4 in manufacturing vaccines locally to meet demands in Egypt and in Africa and close the gap between developing countries and developed countries in terms of the vaccinated population.

He thanked V4, which includes Slovakia, Poland, Hungary, and the Czech Republic, for offering Egypt 250,000 jabs and the other European countries who also gifted Egypt with the vaccine.

Sisi concluded his speech at the press conference by thanking the V4 for their cooperation and understanding of what is happening in Egypt, but saying this is “not enough.”

Sisi said he appreciates V4 help in combating illegal immigration but added that the phenomenon reflects the poor conditions of human rights in the region, not from the perspective of freedom of expression or political engagement, but rather many other aspects that are not provided in the region.

“Are European countries willing to contribute to the improvement of these countries political, economic, and possibly cultural conditions to arrive at a different approach to human rights, which is always controversial issue between us and our European friends?” Sisi asked.

“Are you willing to localize some of your industries in our countries to provide job opportunities to more than 65 % of our population who are youth? Or is it that only the political leadership in our countries who are required to meet standards that exist in your own perception?... Are you willing as developed states to twin your advanced universities with Egyptian ones to provide education that meets the demands of our era?” he continued.

Sisi said he does not mind tackling the topic, but from a perspective that assures a decent life for 100 million Egyptians, adding that the discussion on human rights should be deeper than it is.

While Egypt has succeeded in preventing any boat of migrants from leaving its shores, but migrants in Egypt have amounted to six million from Africa and other unstable countries.

“From a human rights perspective, Egypt refuses to play that card. We call them guests, bot refugees. We don't have refugee camps in Egypt. They live like every other Egyptian; they learn in our schools and they are treated in our hospitals. They were even offered the [Covid] vaccine, although we couldn't provide rates as high as those in European countries.”

From a humane and ethical perspective, Sisi said, Egypt did not let those migrants into the sea to face the unknown.

The projects inaugurated in the past seven years prove that Egypt seeks to advance at all levels with “determination and persistence,” highlighting Haya Karima initiative, dubbed Decent Life, which was launched to improve the living standards of 60 million people at a budget of L.E.700 billion in three years.

"The initiative changes the life of people in all fields, such as education, health, even sewage systems, sewage treatment plants, roads, irrigation, everything. What I mean to say is that you are dealing with a country that fully respects itself and its people,” Sisi said.

“We are a leadership that respects and loves its people and seeks their advancement. We do not need anyone to tell us there are infringements on human rights standards,” he added.

The Egyptian president compared the population of Egypt, 100 millions, to that of Poland, about 40 million, and those of Czech, Slovakia, and Hungary, about 10 millions each, saying that it is not easy to be “revive and protect” 100 million souls, 65 percent of whom are youth.