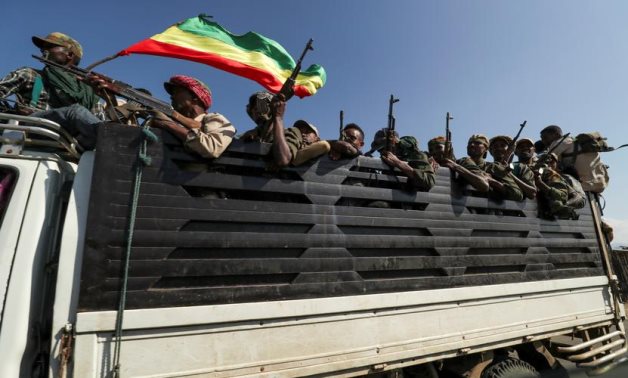 FILE - Members of Amhara region militias ride on their truck as they head to face the Tigray People's Liberation Front (TPLF), in Sanja, Amhara region near a border with Tigray, Ethiopia - Reuters

The HRW report said grave violations of international humanitarian and human rights law have occurred since Tigray conflict has started in November 2020.

It said that these crimes include “massacres of civilians; widespread rape and sexual violence against women and girls; forced displacement; arbitrary detentions; widespread destruction and pillage of hospitals, schools, factories, and businesses and destruction of refugee camps”.

The report also complained about a “concerted effort to prevent reporting from the ground with attacks and intimidation of humanitarian workers and journalists.”

“War crimes and crimes against humanity, may have been committed,” the report said.

The report expressed concerns that the region is now facing a “severe man-made famine” as a consequence of the deliberate actions of the warring parties.

This includes the “destruction of harvests, looting of farms and agricultural resources, and restrictions of movement of people and aid workers.”

The report urged the Council to adopt a resolution this session to ensure “international scrutiny of this human rights crisis.”

Ethiopia's government has been battling the Tigray People's Liberation Front since late last year, causing the death of thousands of civilians and an unknown number of combatants.

This is in addition to the humanitarian crisis and the probable famine the Ethiopian forces have caused in the region as a result of the conflict.