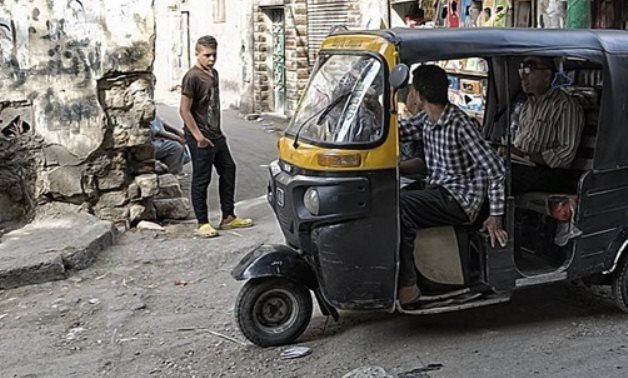 Chairing a meeting earlier Sunday to discuss the issue, Madbouli stressed that the move would bring about many benefits for auto-rickshaw owners, who will be entitled to insurance coverage and a retirement pension, and society as a whole, Cabinet Spokesman Nader Saad said.
Only 10 percent of motorized rickshaws in Egypt have been licensed in 22 governorates, deplored the premier during the meeting, held in the presence of the ministers of finance, local development, trade, and industry, along with a host of senior officials from relevant state bodies.
Madbouli instructed the ministers concerned to draft a memorandum including a package of facilitating measures and incentives that would encourage tuk-tuk owners to have their vehicles licensed.
Meanwhile, Local Development Minister Mahmoud Sharaawy has been directed to coordinate with provincial governors to facilitate the licensing procedures for minivans as a safe mass transport mode to replace tuk-tuks.
Moreover, minivan tuk-tuks' owners will also benefit from the presidential initiative and convert petrol-run cars into natural gas vehicles (NGVs).
In March 2018, the state-owned Central Agency for Public Mobilization and Statistics (CPAMS) said that the number of licensed tuk tuks in Egypt in the period between 2014 and 2016 reached 99,000 tuk-tuks, noting that the number is increasing. Meanwhile, the number of unlicensed tuk-tuks reached more than 3 million rickshaws.

In February 2018, Secretary of the Parliament’s transportation committee, Khaled Abdel Azeem, criticized the government for not taking actual steps to stop tuk-tuks from plaguing Egyptian communities and turning them into slums.

In September 2018, while a police force was patrolling a town in Assiut, it suspected three people on a tuk-tuk vehicle, the ministry said in a statement. The three men opened fire at the force when it stopped them, according to the ministry. The force returned fire, killing one and wounding another. The third fled. In the same month, a girl was killed and two others were severely injured after a tuk-tuk collided with a passenger train in Dishna, Qena, while trying to pass a railway crossing.

A tuk-tuk is a common form of urban transportation. It is a development of the still available two-wheeled pulled rickshaw by which a runner draws a cart with a seat for one or two people. It is believed the pulled rickshaw was invented by Japan in the 19th century. Rickshaws then appeared in India, China and other big cities in Asia.