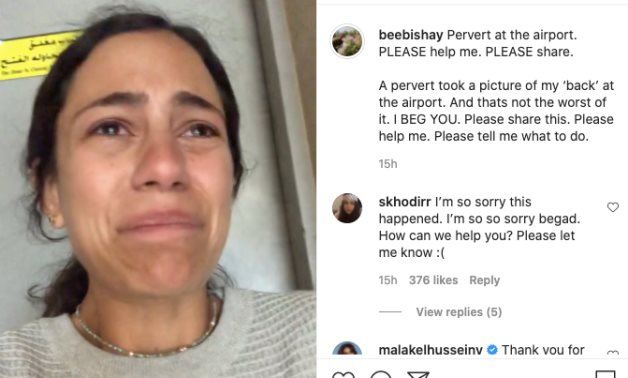 CAIRO – 15 June 2021: An Egyptian young lady posted on her Instagram that she was subject to non-physical sexual assault at Cairo International Airport, when she saw a man taking photos of her and other female passengers from the back.

Broke into tears, Basma (identified on Instagram as a blogger, and under the name Bee Bishay) shoot a video at the airport saying that her flight from Beirut landed in Cairo Monday, and she was collecting her baggage when a friend spotted a man taking photos of Basma from her back.

Bishay confronted the man who denied the incident, and refused to show up his phone. She then took him to the airport security men to prove his assault.

Inside the room, there were a number of men, whom she thought at first to be police officers; she was frustrated as they seemed unhelpful and were only checking the pictures on the man's phone, according to her video, in which she blamed officers for not doing their job.

Four hours later, she posted another video on Instagram saying that the men in the room were neither police officers nor airport security, and that the “real” police officers intervened and were very helpful, and that they investigated the man for a long time, before he was finally handcuffed and arrested.

“Actually I cannot remember what I said [in the first video] because I was very angry.. my sister told me that I generally blamed police officers and major generals as not doing their job, but in fact, what happened is that the men in the room were not police officers and I thought they were,” she said.

Bishay continued, “lots of interrogations were conducted [with the assaulter].. like 20 pages were written on the incident,” she said in the second video. “We have seen a huge support from [the police officers] … and when I thanked them at the end... [the police officers] said they have just done their job.”

Bishay added that the officers took a good care of her and that she is very grateful for their help. "I just want to say I am really sorry for what I said earlier."

Bishay’s airport videos garnered hundreds of thousands of views, and huge support from her followers and Instagram users, who kept sharing her footages.

The accused man was referred to prosecution, where investigations will kick off into the incident.