Black Fungus: What we know so far 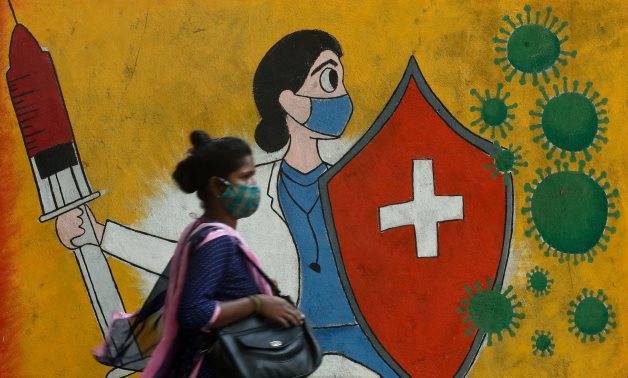 A woman walks past a graffiti on a street, amidst the spread of the coronavirus disease (COVID-19) in Mumbai, India, May 10, 2021. REUTERS/Francis Mascarenhas

CAIRO – 26 May 2021: Over the past days, pictures of people diagnosed with black fungus in India have dominated the news across the world that is already exhausted fighting the Coronavirus pandemic.

The news ranged an alert bell that countries need to be prepared for the serious conditions caused by rare but dangerous fungal infection. In India, the disease recorded multiple deaths and deteriorated cases, requiring, in some cases, the removal of the eye, nose or some parts of the body, to keep the person alive.

Egypt’s Ministry of Health and Population revealed that it prepared the first isolation room for patients infected with black fungus disease at Al-Negela Hospital, and stated that the hospital has not yet received any cases.

The Ministry of Health assured that the Black Fungus disease is rare, and it occurs due to wrong or excessive use of cortisone drugs or antibiotics, and therapeutic protocol set for COVID patients. The ministry has stressed that COVID patients are among the most vulnerable groups to be infected with the Black Fungus, as well as diabetics and patients with tumors due to their low immune system.

This fungal infection appears to have different types as reported in India: Black Fungus, Yellow Fungus and White Fungus, with the yellow reported as the most fatal one.

What does Black Fungus do?

According to Ministry of Health, the Black Fungus disease affects the cerebral mucosa, the sinuses and the brain, the lungs, causes dermatophytosis and disseminated mycosis.

Patients suffering from the fungal infection typically have symptoms of stuffy and bleeding nose; swelling of and pain in the eye; drooping of eyelids; and blurred that could lead to loss of vision, and there might be black patches on the skin around the nose, according to BBC.

Any cases reported in Egypt?

The Ministry of Health has not officially reported any cases with Black Fungus; however, a 62-year old lady in Fayoum, who recently recovered from COVID-19, was diagnosed with the fungal infection.

Mounir suffered from half headache, pain in the right jaw, numbness all over the left side of her body, and gradually was not able to open her left eye, according to her daughter Amira Mounir, who said that doctors could not diagnose her in the beginning.

Who is vulnerable to Black Fungus?

Doctors believe that people with low immune system, or who suffered a drop in immunity could be triggering such cases of fungal infection or (mucormycosis).

Health experts said the use of steroids, which was used in reducing lung inflammation in severe COVID patients, is a trigger to mucormycosis as it reduces immunity and increases blood sugar level.

The Egyptian Ministry of Health release a statement saying that the Black Fungus is a non-infectious disease, and is transmitted through inhalation, contact and swallowing.

The statement also revealed who are the groups vulnerable to the Black Fungus:

1- Patients with uncontrolled diabetes who are affected by its severe complications, especially diabetic coma associated with acidosis.

4- Patients who have received an organ transplant or a stem cell transplant.

5- People with severe drop in the number of white blood cells.

6- Prolonged excessive use of cortisone.

8- People who had burns, surgeries and wounds.

The Egyptian Ministry of Health and Population revealed that patients infected with black fungus, are treated with anti-fungal drugs that are prescribed under full medical supervision.

“If the disease is not controlled, it becomes dangerous, and the treatment period ranges from four to six weeks, and sometimes it may require surgery to remove dead or infected tissues, such as removing the eyes or the upper jaw to stop the spread of infection,” read a statement by the ministry.

The ministry further explained that the treatment of black fungus cases should start early, as it may cause death, especially with death rates for that fungal infection ranges between 20 to 50 percent among patients with severe symptoms, depending on the type of fungus causing the disease and the affected part of the body.