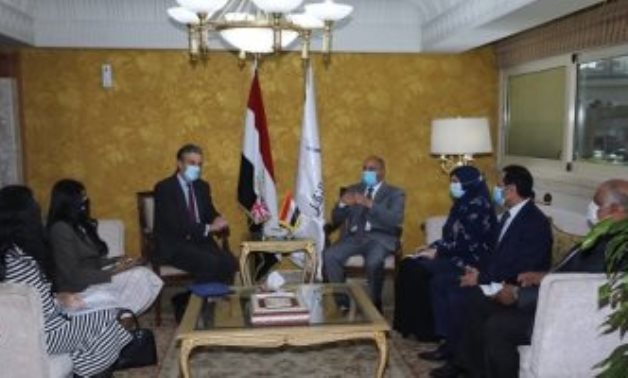 CAIRO – 26 May 2021: Egyptian Minister of Transport Kamel el-Wazir met with British Ambassador to Egypt Sir Geoffrey Adams to discuss cooperation in current and future projects in the fields of railways and metro.

Both sides affirmed the deep Egyptian-British relations, and historical cooperation between the two countries in the field of railways, according to a statement by the UK Embassy in Cairo.

Then they discussed the latest developments concerning the supply of the first two monorail trains from Alstom factories in Derby in England, after Alstom acquired Bombardier.

They further discussed the latest developments regarding UKEF financing for a deal to supply 50 new tractors and upgrade 50 Henschel tractors, which were part of a deal signed between the Egyptian Railway Authority and the U.S. company Progress Rail.

Among the topics discussed also was the interest of the UK branch of Hitachi company to manufacture and supply 200 sleeping cars for the Egyptian Railways Authority. For its side, Egypt has an ambitious plan to support the sleeping car fleet to improve the services provided for citizens.

The British Ambassador also stressed the interest of the American company Bechtel, which has a branch in England, in cooperating with the Ministry of Transport in the sixth line of the metro project, as the company would submit a technical and financial offer during the first week of next July.

“Today’s meeting with the Minister of Transport, Lieutenant General Kamel the Minister, was fruitful as we discussed ways of British-Egyptian cooperation to support the transport sector in Egypt through the efforts of British companies, and with the support of the British Export Finance Agency. Developing a more sustainable and efficient rail and transportation system that serves millions of Egyptians every day,” said British Ambassador to Egypt Sir Geoffrey Adams.

Ambassador Geoffrey Adams also emphasized the continued interest of British companies in the Egyptian market, highlighting a deal between both countries to establish two monorail lines in the Greater Cairo area, which will transport millions of people every year.

The deal included a UK sum of £ 517 million and a contribution from UKEF of more than £ 1.7 billion, the largest amount of funding it has ever provided for an infrastructure project overseas.