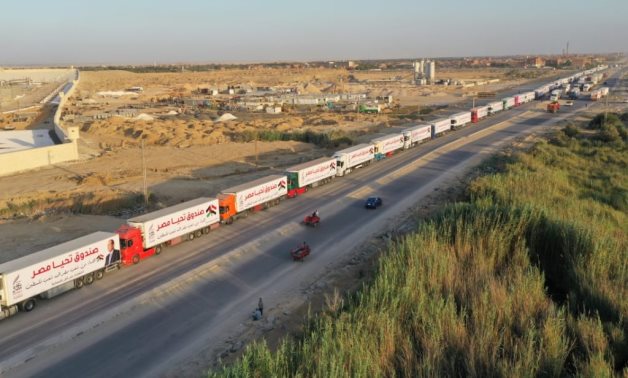 CAIRO – 25 May 2021:  A third convoy of 700 tons of aid and foodstuffs from Tahya Masr Fund is on the way to Gaza, spokesperson of the fund said Tuesday.

The fund has already provided more than three tons of aid and 130 trucks of food commodities in the second convoy that arrived on Tuesday to Rafah border crossing, spokesperson Mohamed Mokhtar told Mehwar T.V.

The second convoy includes 500 tons of ceramic tiles and plumbing supplies, as well as baby formula, fruits, and canned food, he said.

The fund’s page on Facebook published videos of Gazans extending their gratitude to Egypt for the support, from mediating to establish a ceasefire to donating tons of aid and treating the injured.

The fund has also allocated $500 million for the reconstruction of Gaza and launched bank account #037037 to accept donations for the Palestinian impoverished strip by Egyptian construction and infrastructure companies, who have gained massive experience after participating in dozens of infrastructure projects in Egypt in the past few years, including building new cities.