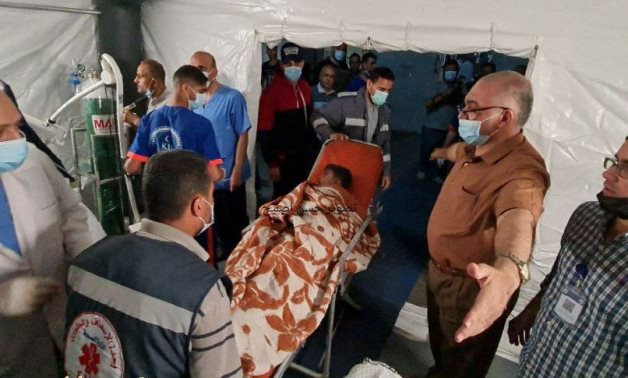 CAIRO - 18 May 2021: Israeli forces Tuesday killed a Palestinian youth near al-Karantina area in the center of the occupied West Bank city of Hebron, according to the Palestinian Health Ministry.

It said that Israeli forces gunned down a Palestinian young man in the southern West Bank city of Hebron.

Witnesses said that the Israeli soldiers opened intensive fire towards the man, who remained unidentified, severely wounding him. They cordoned off the area, preventing anyone from approaching the scene to identify the slain Palestinian and medics from providing treatment to him. The slain Palestinian’s body is withheld by the soldiers. They also prevented journalists from reporting on the incident, opening fire towards them.

Two Palestinians were injured by Israeli military gunfire as Israeli forces backed a settler assault in Burqin village, west of Salfit city, according to local sources.

They said that Israeli settlers, under the military protection, forced their way into the village to carry out attacks and vandalize property, sparking confrontations.

The villagers attempted to fend off the settler attack, but were met with Israeli forces gunfire, resulting in injuring two young men. The casualties, who were hit by rubber-coated steel bullets, were rushed to a hospital, where their condition was reported to be moderate.

Israeli military claimed that the slain Palestinian purportedly attempted to carry out a shooting attack before being killed. No soldier was hurt in the alleged attack.

There were no official Palestinian information on the incident, and circumstances surrounding it remain unclear and largely based on the Israeli version of events.

Many Palestinians were injured or killed in similar incidents under the pretext of alleged stabbing attempts.

Israeli has been criticized for its reflexive use of lethal force and “extrajudicial killings” when Palestinian alleged attackers no longer pose an immediate threat. The UN Office for the Coordination of Humanitarian Affairs (OCHA) said that circumstances surrounding such killings over the past months remain disputed.

Video footage for similar alleged attacks, such that of Elor Azarya’s killing of Abd al-Fattah al-Sharif, appear to disapprove Israeli military claims, showing that lethal force was used against Palestinians when they posed no immediate, life-threatening danger, and they did not even attempt to carry out any attacks.

Palestinians have always maintained that such incidents among other measures, taken under the guise of security, are intended to entrench Israel’s 54-year-old military occupation of the West Bank and its settler colonial project which it enforces with routine and frequently deadly violence against Palestinians.