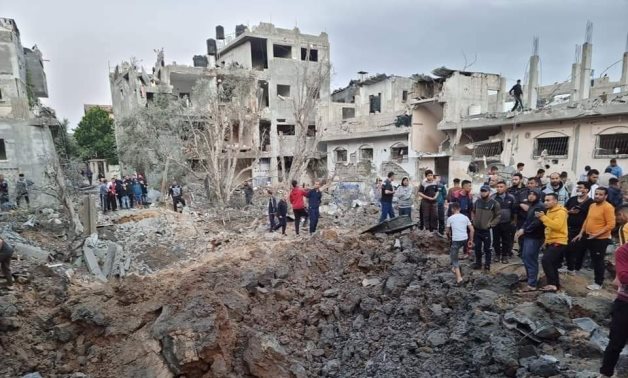 Buildings destroyed by Israeli raids on Gaza Strip on May 14, 2021. The Palestinian News and Information Agency (WAFA)

CAIRO – 14 May 2021: The Palestinian Ministry of Health announced Friday the updated figures of casualties caused by Israeli raids against Gaza since May 10 as they reached at least 115 deaths, including 28 children, and 621 injuries.

The Spokesperson of the Israeli army announced Friday firing 450 missiles by 160 warplanes – which took off from six bases - against 150 targets that allegedly belong to Hamas, mainly a tunnel network lying in the northern and eastern neighborhoods of Gaza Strip.

The United Nations indicated Friday that Israeli strikes incurred the destruction of 200 residential units in Gaza Strip as well as 31 educational establishments such as schools, vocational training centers, and colleges. 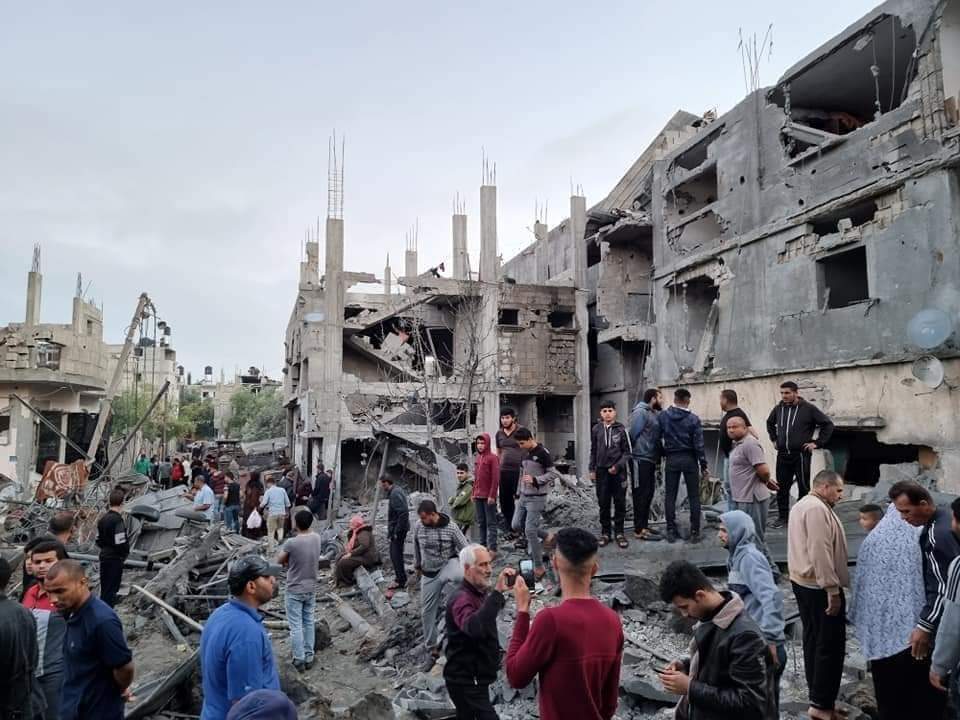 Power went off in most areas of Gaza Strip since last night as a result of the ongoing Israeli aggression not just from land and air but also from sea as Israeli battleships struck the shores of Shatea El Sudaneya northern Gaza.

As reported by the Palestinian News and Information Agency (WAFA), the latest Israeli airstrikes targeted residential facilities and homes in the town of Beit Lahiya, north of the Gaza Strip, resulting in at least four Palestinians killed and dozens injured. Over 20 wounded were moved to hospital, and dozens of families were displaced.

Another heavy barrage of Israeli bombing from the land, air and sea targeted the neighboring town of Beit Janoun, which caused significant damage and mass destruction of dozens of residential facilities.

Hundreds of families from the northern Gaza Strip were seen fleeing their homes towards the south as a result of the heavy Israeli bombardment. 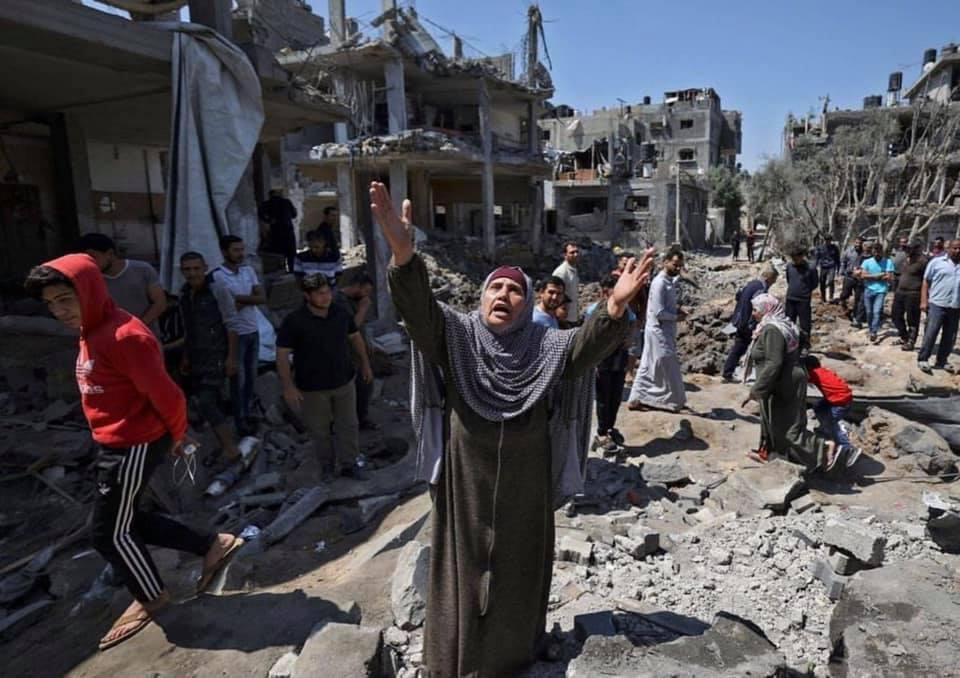 The cities of Rafah and Khan Younis in the south of the Strip also came under heavy artillery bombardment which caused significant damage to infrastructure and residential facilities.

All power lines that come from Israel in Gaza were broken as a result of the ongoing bombardment, while the only power generating plant in the central Gaza Strip ran out of fuel following Israel's shutdown of the only commercial border crossing with Gaza. 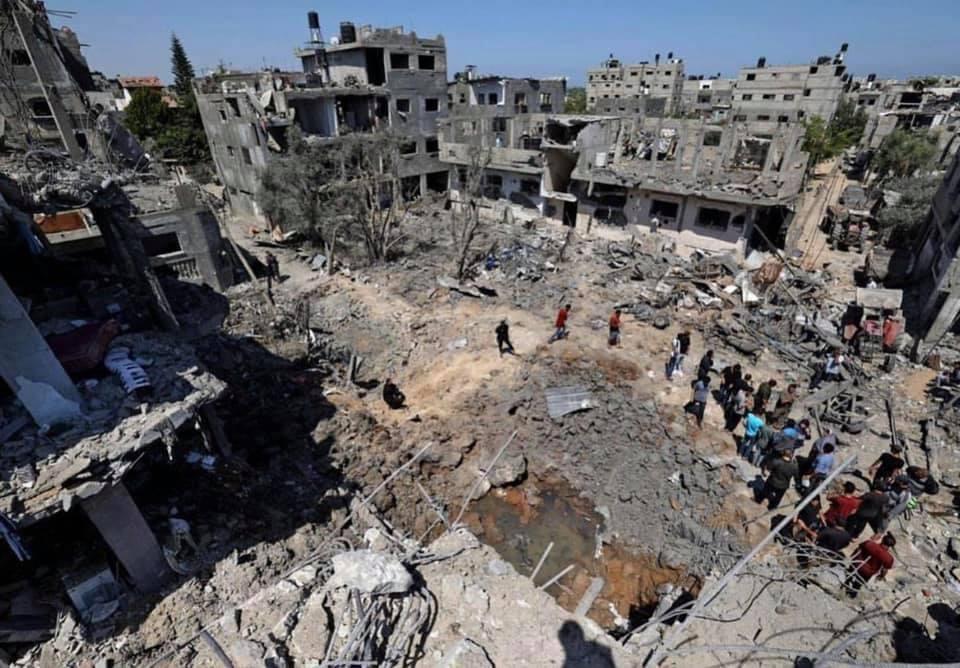 The blackout of electricity in Gaza threatens of a human disaster that may result from the imminent blocking of vital sectors, including the healthcare, water, sanitation, environment and public services sectors.

Israeli police also detained around 374 Palestinians holding the Israeli nationality against the backdrop of the ongoing protests in support of Jerusalem and Gaza.

In the city of Lod, clashes erupted between Palestinian citizens and hardcore settler groups who attacked a mosque and opened gunfire at many Palestinian-owned homes in the city.

In Jaffa, a group of Israeli settlers protected by a police escort opened gunfire at a mosque while several worshipers were inside. No injuries were reported.

In Haifa, Israeli police detained 30 Palestinian protesters, including a 10-year-old child, while demonstrating in support of Jerusalem and Gaza.

Hardcore settlers also broke into the Palestinian neighborhood of Wadi Jamal in Haifa and fired live shots and stun grenades at inhabited homes.

In the village of Kafr Manda, a 23-year-old youth was stabbed and moderately injured by Israeli settler at a road junction on the entrance to the village.

As for the West Bank, the total number of injuries among Palestinians eastern Nabuls due to clashes with settlers has amounted to 101 since early Friday.