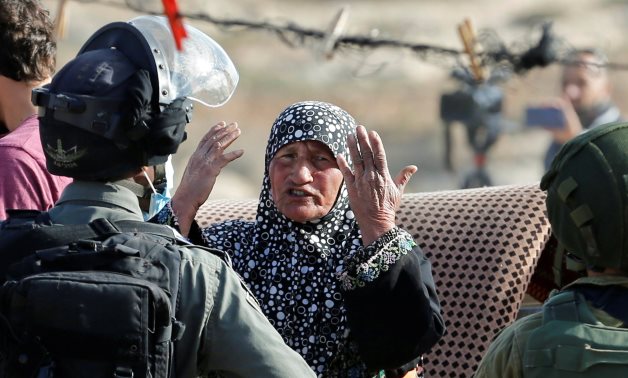 A Palestinian woman reacts in front of Israeli forces as Israeli machineries demolish a house, near Hebron in the Israeli-occupied West Bank November 25, 2020. REUTERS/Mussa Qawasma

Explosions shook buildings across the besieged Gaza Strip on Tuesday and rocket sirens sent Israelis in many southern towns scurrying for shelter overnight.

Hours later, the Islamic Jihad group said two of its top commanders were killed in the Israeli Gaza strikes.

At least 24 people, including nine children, were killed in Gaza overnight, most of them in Israeli strikes, according to Palestinian officials. More than 700 Palestinians were hurt in clashes with Israeli security forces in Jerusalem and across the West Bank in 24 hours, including nearly 500 who were treated at hospitals.

Conricus said Israel could not yet confirm or deny that its strikes caused Palestinian civilian casualties in Gaza.

He said Hamas was trying to "nurture a narrative of damage to non-combatants done by Israel. That is not true."

Israel's army estimated that roughly a third of the rockets launched by militants had "fallen short", landing inside Gaza, and may be responsible for Palestinian casualties, Conricus said.

The home of one militant commander and a "Hamas intelligence centre" were also targeted, the spokesman said, without providing details.

"We are in the early stages of our counter strikes... They will continue."

The latest round of violence, like previous ones, was fueled by conflicting claims over Jerusalem, home to major holy sites of Islam, Judaism and Christianity. The rival national and religious narratives of Israelis and Palestinians are rooted in the city, making it the emotional core of their long conflict.

In recent weeks, tensions have been soaring in Jerusalem, marked by clashes between Palestinian protesters and Israeli police in the walled Old City, located in East Jerusalem which Israel captured and annexed in the 1967 war.

One of the flashpoints in the Old City has been the Al-Aqsa Mosque compound, the third holiest site of Islam and the holiest site of Judaism. Another driver of Palestinian anger has been the threatened eviction of Palestinian families by Israeli settlers from their homes in the Sheikh Jarrah neighbourhood of East Jerusalem just north of the Old City.