Three of EVER GIVEN crew members were granted permission to leave the ship: BSM 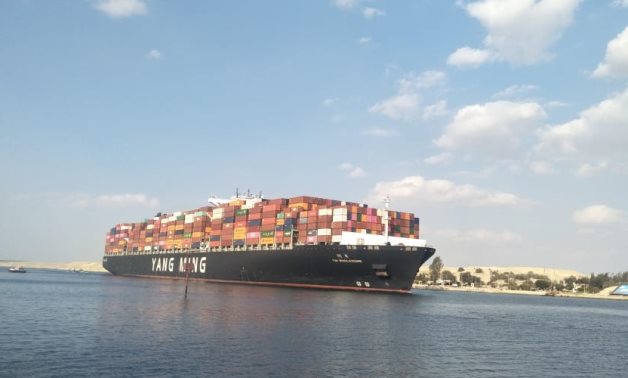 CAIRO – 29 April 2021: Bernhard Schulte Shipmanagement (BSM), the ship-manager of the containership EVER GIVEN said that three of the crew members were granted permission by the Suez Canal Authority (SCA) to leave the ship.

In a statement published on the company’s website, Thursday, providing update on the status of the crew members it was stated that when the vessel went aground all crew onboard were within the terms of their contracts.

“However, delays in allowing the vessel to depart mean that three crew members are now due to be relieved. Requests to allow the overdue crew to depart have been granted by the Suez Canal Authority (SCA). Minimum safe manning standards for the vessel will be maintained at all times and crew members who depart the vessel are being relieved.” The statement read.

The company said that currently, there are 25 Indian national crew members onboard the vessel. “All are safe, in good health and good spirits”.

“Our utmost priority remains the safety and wellbeing of our crew. We are in regular contact with them and their families, offering all necessary support. While we are hoping that the vessel and her crew will be able to resume the voyage as soon as possible” BSM stated in the statement.

On April 26, The Egyptian Suez Canal Authority (SCA) denied, circulated reports on arresting any of EVER GIVEN crew members

SCA head admiral Osama Rabie said in a statement that the authority does not object the leaving or replacing of any of the crew members, provided the presence of the sufficient percentage of sailors necessary to ensure the ship security.

Earlier on April 15, SCA has allowed two members of the Panama-flagged Ever Given vessel’s crew to leave Egypt due to emergency personal issues

In his statement, Rabie affirmed the authority's keenness to make the ongoing negotiations with EVER GIVEN’s Panamanian vessel owner company and the insurance company successful. He added that the authority showed a lot of flexibility aiming to reach compatible solutions suitable for all parties.

Rabie expressed his hopes for reaching an agreement as soon as possible in light of the great facilities provided by SCA.

SCA head affirmed that that the commission deals the situation and negotiations with complete flexibility.

In previous statement Rabie affirmed that the investigations into the accident of grounding of the arrested EVER GIVEN ship, are still ongoing, in parallel with the continuation of negotiations with the shipowner and an insurance club to reach an agreement regarding 916 million claims in compensation.

“The authority spares no effort to ensure the success of the negotiations and fully cooperates to meet the crew’s demands [on board of] the ship, which is currently detained in the Great Bitter Lakes until the end of the investigations,” said Admiral Rabie, adding “In this regard, the authority responded to requests submitted by the shipowner to allow two members of the crew to leave the ship and go back home for emergency personal issues.”

The admiral affirmed that all logistical requirements for the ship's crew are provided through the shipping agency. All 25 members of the ship crew are Indians.

On March 23, the Ever-Given ship went aground in the 151 km of the Suez Canal, where the vessels in both directions pass, causing the suspension of the international maritime navigation through the canal for six days.

Egypt has asked for 916 million in compensation for damages caused by the grounding of the ship, the salvage operation, and for loss of reputation.