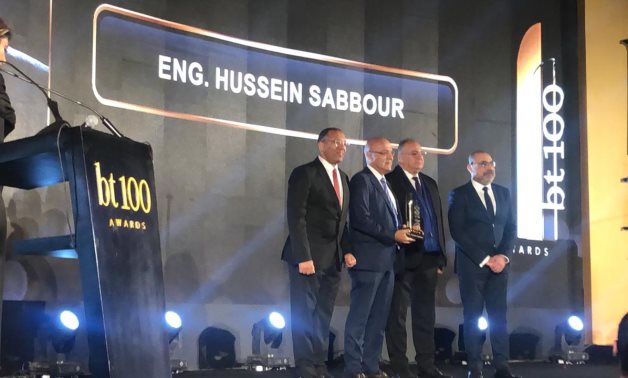 CAIRO – 30 March 2021: The fourth edition of Bt100 Awards on Tuesday handed awards to a number of ministers, figures and leading businesses in Egypt that managed to maintain good performance during the year of the pandemic.

The event came with the participation of many ministers and more than 450 businessmen and heads of economic institutions.

The event this year came to assess the economic experience in Egypt during the past year since the pandemic hit the country and to hail the most resilient sectors amid such challenges. Awards were also handed to Minister of Trade Nevine Gamea, Minister of Social Solidarity Nevine El-Qabbaj and head of the National Council for Women Maya Morsy. Delivering a speech at the Bt100 Awards ceremony, Minister of Finance Mohamed Maait said the Egyptian economy has shown better performance than international expectations during the coronavirus pandemic.

Maait said the economic reform program contributed to enabling the state to adopt a flexible policy in facing the severe economic implications of the pandemic, supporting the most harmed classes and advancing national economy. BT100 is a tribute to the leaders of the governmental and private sectors, and corporate for their important and effective role in improving the Egyptian economy. The ceremony aims at encouraging other companies to improve their performance, and develop their marketing methods and their selling skills.

Candidates for the prizes are chosen according to certain criteria by the jury and evaluation to select a number of companies in different sectors, including the financial, industrial and investment sectors, the real estate sector, and the communications and information technology sector.

All candidates are chosen based on certain criteria and standards that rely on market studies and research to evaluate the activities of all companies operating in the Egyptian market, including companies with innovative creative ideas and practical and effective solutions.

This comes in addition to prizes for the best corporate social responsibility initiatives, the best market share and investment performance, and the best sustainable agreements and partnerships between the private sector and the public sector that would serve the country's goals in the comprehensive economic development plan for Egypt 2030.