By: Mona Ahmed
CAIRO - 25 December 2017: Al-Zahir Barquq Mosque is one of the most famous places from the Fatimid Dynasty’s rule in Egypt. Take a visit to Old Cairo's most remarkable historic street, El-Moez, to take a glimpse of the mosque.

Upon the orders of Al-Zahir Barquq, the mosque was built in 1384-1386 as one religious complex. It entails a mosque, a school, and a mausoleum. All were subtly designed to remain as a witness for the grandeur of architecture surviving over hundreds of years.

According to history references, the Circassians were first imported to Egypt as slaves by Sultan Qalawun in the 13th century. As a Circassian, Barquq freed himself in 1363 to establish his own dominance with the help of Circassian Mamluks in 1382. He indeed established himself and was married to the last descendant of Qalawun's family – Baghdad Khatun. Barquq ordered this complex to be constructed as a funerary for his family.

Barquq School includes an old huge building formed out of huge rocks. The old building is meant for the accommodation of over 100 students of those who were interested in studying the four schools of Islamic religion. The school has further included rooms for the teachers annexed with stables for the horses.

The marble-floored entrance is marked by a very high, wide, ventilated opening meant to allow sound to echo. This genius design made it easy for teachers to be heard when they called a student’s name.

At one side of the wide, rectangular complex is the mosque (prayer area). In the middle, there is a fountain that was used by worshippers to make ablution before the prayer.

Barquq Mosque has a distinctive octagonal minaret that differs from other 14th century minarets. The ceiling of the mosque is decorated with intersecting white and blue marbles in the stones. The design is inspired by the intersecting arches at the top of the minaret of Qalawun Mosque. The minaret was based on four columns taking the shape of a ram's head.

The mosque contains four “iwans” (vaulted spaces that open on one side to a courtyard) with large pointed arches and inscriptions carved in stone. The open court is paved with marble mosaic and features large porphyry (colored marble) disks.

The mausoleum is located underneath one of the four iwans to the north side of the prayer hall. It is found directly after a decorative passage that leads into the mausoleum. The dome above the mausoleum has wooden pendentives that are painted with magnificent decorations. The windows of the mausoleum are of shiny colorful glass that radiates the sun light all day long.

Shihab al-Din Ahmed ibn Muhammad al-Tuluni was the founder of Barquq's religious complex. As a descendant of a family of architects, Tuluni's architectural experience and creative artistic personality have partaken to leave a mark all over the mosque.

Out of his gratitude for the creative architect, Barquq asked Tuluni – a Christian who converted to Islam – to have the façade windows of the mosque made into the cross shape.

It was notable that the doors all over the mosque have two bronze medallions of varied sizes to knock on the door. The big medallion was used for men, while women used the smaller knockers. This design was mainly meant to avoid contact among men and women.

The mosque is a piece of art that loudly speaks of the grandeur of the founder. It was created by a genius architect aware of the place dimensions and the people traditions during that era. 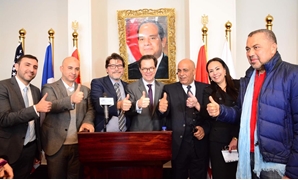 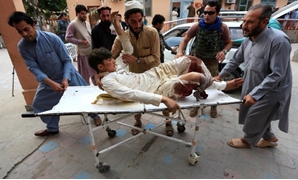