What happened when Croatia met France at World Cup 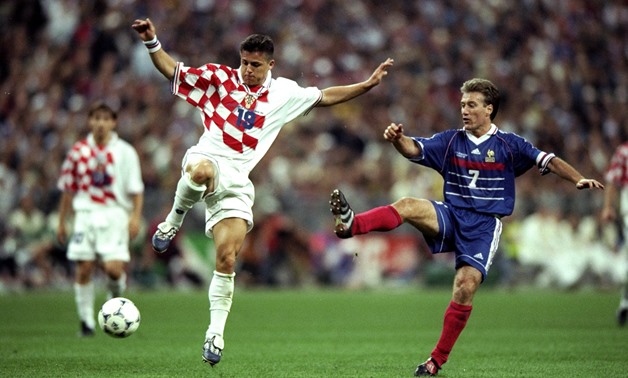 During their first participation in the World Cup as an independent nation in 1998 in France, they were the underdogs of the tournament.

The team found their way towards the semi-final as they finished second at the group stage behind Argentina.

Croatia met Romania at the round of 16 and they won the game thanks to a goal by Suker seconds before the half time and they kept their lead stopping all the attempts from George Hagi to win the game and reach the quarter finals.

At the quarter finals, Croatia had to face the pre-tournament favorites, Germany, who achieved the UEFA EURO 1996.

Everyone expected an easy victory for the Germans but the Croats surprised everyone. Croatia's goalkeeper, Drazen Ladic, saved a header from Oliver Bierhoff in the first minutes and after that the Croats dominated the game.

German defender, Christian Wörns, was sent off after a tough tackle against Suker before the half time and minutes later Croatia opened the score from a screamer by Jarni.

In the second half, the Croats’ dominance continued despite the Germans’ attempts to equalize and Goran Vlaović made the score 2-0 for Croatia ten minutes before the final whistle.

The Croats knew they have to defeat the host nation, France, at the semi-final to reach their first World Cup final; France national team was also dreaming of the same glory.

In 1998, France hosted the World Cup for the second time in their history. They first hosted the competition in 1938, when they were eliminated in the quarter-finals by the title holders, Italy.

France topped their group with 9 points from three victories over Saudi Arabia, South Africa and the UEFA EURO 1992 winners, Denmark, to reach the round of 16, where they played against Paraguay.

France failed to score during the regular time, but they secured their victory thanks to a golden goal from their veteran defender, Laurent Blanc, that sent them to the quarter-finals.

France again found themselves against the Italians, who sent them out of the 1938 World Cup, but the French gained more confidence during their path and were ready to take revenge.

Both teams failed to score, despite having two massive attacking lines, and the game went to a penalty shootout. The French goalkeeper, Fabien Barthez, took his nation’s 60-year revenge when he saved two shots from the Italian players, leading his team to the semi-finals.

On that night in July at Saint Denis, the Croats were the better side creating more chances to score; they found themselves leading the game after the second half start by Suker.

Suker received the ball alone at the edge of the French area while French defender, Lilian Thuram was covering the offside.

After the Croatian goal, Thuram turned into France’s biggest enemy and they would tear him apart if his teammates at the attacking line could not equalize the score.
Thuram had a different idea and decided to make his fate himself.

He ran towards the Croatian area a minute after their goal, took the ball from the Croatian defender and made a one-two with Youri Djorkaeff to score the equalizer for the French.

Thuram did not believe himself, as that goal was his first with the national team since he first wore the jersey in 1994.

The night held more surprise for Thuram, who took the ball from the Croatian defender around their area and scored his second goal in the game, securing his team’s qualification to their first World Cup final ever.

After the game, Thuram was more famous in France than the Eiffel Tower, having turned from their biggest enemy to their hero in just 20 minutes.

Croatia defeated Netherlands at the third place game and the French fulfilled their glory, as they defeated the title holders, Brazil, 3-0 to win their only World Cup in history.

On Sunday, the Croats will face the French again but this time at the World Cup final in a neutral pitch in Moscow.