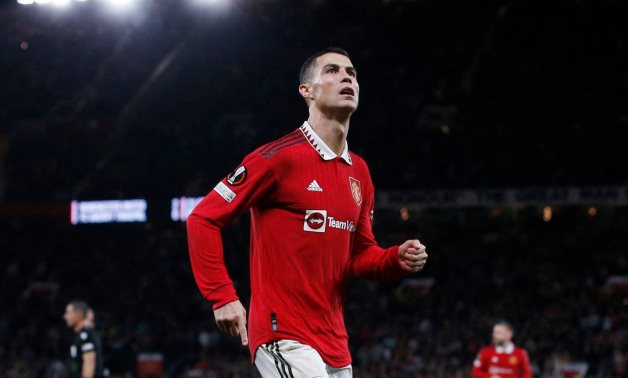 (Reuters) - Manchester United's Cristiano Ronaldo scored on his return to the starting lineup as they sealed a place in the Europa League knockout rounds with a 3-0 victory over Sheriff Tiraspol at Old Trafford on Thursday.

Ronaldo, who was left out of the squad for the weekend Premier League trip to Chelsea for disciplinary reasons, scored United's third goal after Diogo Dalot and Marcus Rashford had given the home side a comfortable lead.

United are in second place in Group E with 12 points from five matches ahead of their visit to Real Sociedad in their final pool game next week, where victory could see them top the table and book a place straight into the last 16.

Erik ten Hag's side never looked troubled against Moldovan outfit Sheriff and might have been out of sight by halftime after creating numerous chances but only had Dalot’s header from a Christian Eriksen corner just before the break to show for it.

Defender Harry Maguire came on for the second half having missed the previous eight games with a hamstring injury as United doubled their lead when Rashford headed in Luke Shaw's cross in the 65th. Ronaldo netted a late third from close range.

The group winners qualify for the last 16 while the eight runners-up will compete in February's playoffs where they face the eight teams coming third in their Champions League groups.

Sociedad defeated Omonia 2-0 thanks to goals from Robert Navarro and Brais Mendez, while Jose Mourinho's AS Roma kept their knockout round hopes alive with a 2-1 win at HJK Helsinki in Group C after striker Tammy Abraham scored their opener.

They have seven points from five matches and lie in third place, needing to beat Ludogorets at home next week to stay in the competition.

Dutch side PSV Eindhoven had earlier advanced to the knockout stage following a 2-0 home win over Arsenal thaks to goals from Joey Veerman and Luuk De Jong.

The result ends Arsenal’s 100% start to Group A, though they had already sealed a place in the top two before the loss.

Ferencvaros are into the last 16 as Group H winners after a 1-1 draw with AS Monaco, who must win their final fixture at home to Red Star Belgrade to make sure of second place.

Ferencvaros have qualified for the post-Christmas stages of European competition for the first time since 1974-75.

Belgium's Royale Union Saint-Gilloise were crowned Group D winners with a 2-0 victory at Malmo, while Bundesliga leaders Union Berlin beat visiting Portuguese side Braga 1-0 to move above their opponents into second place in the pool.

Lazio's Sergej Milinkovic-Savic and Pedro were on target as the Italians came from behind to beat Midtjylland 2-1, and were joined on eight points in Group F by Sturm Graz, who defeated Feyenoord 1-0 with a 93rd minute winner from Otar Kiteishvili.

Any of the four teams could still advance from that group.