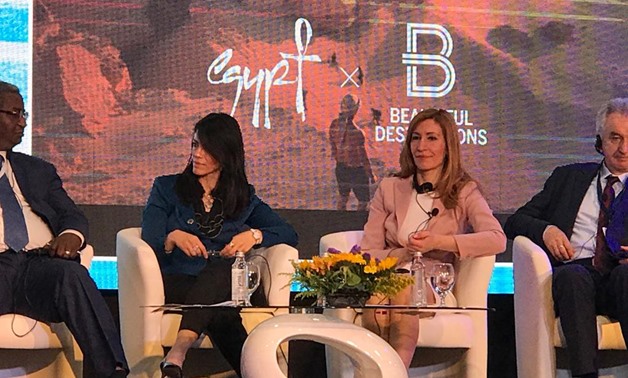 CAIRO - 1 June 2019: Minister of Tourism Rania al-Mashat presented Egypt's success stories in investing in sustainable tourism as part of a panel discussion at the Investing in Investing in Tourism Sustainability Conference (ITSC) in Bulgaria.

During her presentation, Mashat highlighted Egypt's adoption of the concepts of sustainable development through applying a structural reform program, prioritizing green tourism and encouraging hotels to use clean and renewable energy to save power, and preserve environment.

During the session, Mashat reviewed the topics of the structural reform program launched by the Ministry to develop the tourism sector. She also highlighted the international awards received by Egypt reflecting the appreciation of multiple international institutions for Egypt's efforts to promote the tourism sector, such as the shield presented by the UNWTO to the President Abdel Fatah al-Sisi in recognition of his effective support to the tourism sector and the contribution of the sector to Egypt's 2030 development strategy.

Also the "International Entrepreneurship in Tourism Award" received by Egypt from WTTC, in appreciation of the Council for its efforts to promote the sector and its resilience in the face of challenges.

She also stressed the importance of modernizing the promotional mechanisms for Egypt where the campaign of tourism promotion depends on the use of technology and digital platforms to cope with the successive changes in this field.

Mashat affirmed the support of the political leadership for the tourism sector, as it is the fastest growing economic sector and represents 20 percent of the GDP in Egypt, and one of the most important sectors that contribute to creating and providing jobs.

During the session, the Minister presented the promotional film prepared by Beautiful Destinations about Egypt.

The minister also stressed the ministry's keenness to increase the number of women working in the tourism sector, pointing out the cooperation between the ministry and the private sector in this regard, especially in the field of training and providing a workable environment for women.

In addition, the Minister praised the efforts of the National Council for Women (NCW) to promote the rights and freedoms of women, as well as non-discrimination and the principles of equal opportunity.