‘My Arms are a Red Line’: New Egyptian innovation for breast cancer patients 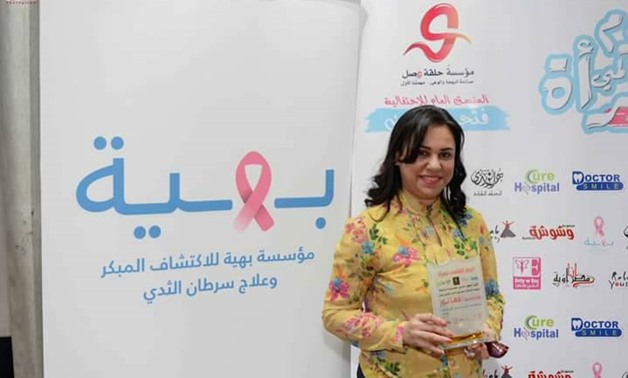 After breast cancer patients undergo surgeries to remove tumors, doctors often warn them that the arm adjacent to the treated breast is at risk of becoming deformed. That arm, is not to be pressured or used negligently, as is often the case. Thus, the bracelet acts as a warning to sign to help others identify the problem and avoid it.

The innovation is catching fire in Egyptian society after being turned into a humane initiative titled "My Arm is a Red Line”. Nour explains to Egypt Today that her idea was based on creating a bracelet with a specific color for breast cancer patients, to be worn on the risked arm.

"As part of the protocol of such a surgery, it is strictly forbidden to carry heavy weights with that arm, and the arm should not be exposed to any possible wounds. The patient must not wear anything tight or any ornaments on that arm, in addition to not taking any blood samples from it either. For example, if a patient fainted in the street and was in a state of severe exhaustion and had to be admitted to a hospital, who would alert the nurses that this lady suffers from breast cancer, which might save one of her infected arms from having blood samples taken from it? The bracelet would,” Nour explains.

“About a month ago I had a situation and I was having my last operation, and that situation almost caused my arm to become permanently handicapped. This is due to the fact that many people don't know that I have breast cancer. The situation happened after serum and a cannula were inserted in the arm next to the breast that was operated in. No one asked me which arm was the healthy one. After having a mastectomy there is a big list of forbidden things for the adjacent arm like getting wounded, burnt, measuring blood pressure, taking an injection, wearing tight clothes or carrying heavy weight. If these rules are not followed and the arm is wrongly used, the patient can easily contract a lividema; the infected arm swells and looks like an elephant's leg, and cannot be treated. The arm remains deformed forever,” Nour clarifies.


Nour elaborates on the matter further. She adds that due to exposure to radiation, the armpit basically swells. This happens because the lymph nodes and glands are removed, and their function is to remove excess fluid from the arm. “Sometimes the swelling is mild, in the first degree. The water collects under the skin and may be mild, but some other times it may be violent. The second degree is severe swelling; the tissue beneath the skin is thicker because in this case it is a mixture of water and proteins that could not be discharged from under the armpit to the circulatory system. The third degree is the hardest one and the tissue is dry under the skin and there is fibrosis as a result of all this swelling and there is not yet a cure for this.”

Nour has ensured that her bracelet is long-lasting, and durable. The bracelet is rust-resistant, made of copper and plated either in silver or gold. This helps render the bracelet accessible to everyone and their colors are specific and harmless and do not react with the skin so as not to cause allergies.

“Nurses and doctors can then recognize the condition of the patient by seeing this bracelet. This innovation is mainstreamed in all governorates of Egypt, and all government and private hospitals, and cancer institutes and are at nominal prices to benefit both rich and poor,” Nour states.

The bracelet is for men too

“The initiative is not just about women, as men are can develop breast cancer as well," she explains. For every 100 women, there is one man infected, but many men are unaware of their injury. A thing which always leads to late discovery. Therefore, it should be warned that if a small block is felt under the armpit, they must consult with the competent physician in order to do the necessary tests,” Nour affirms.

Her bracelet is also available for men.