Saudi women celebrate Women's Day with a jog in Jeddah 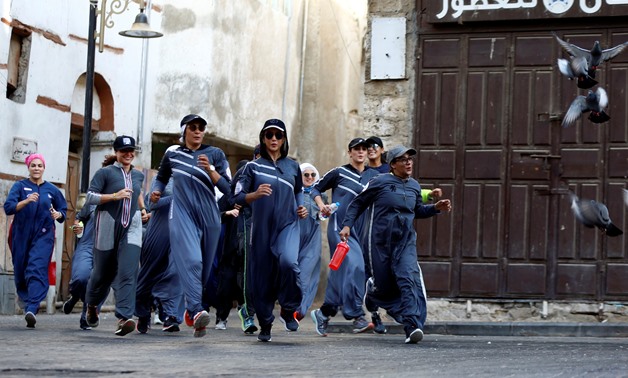 JEDDAH, Saudi Arabia - 9 March 2018: Paying no heed to bemused onlookers, a group of women in the Saudi city of Jeddah marked International Women’s Day on Thursday by exercising one of their newly acquired freedoms: the right to go for a jog.

Saudi women have had a momentous year as the young, reform-minded Crown Prince Mohammed bin Salman lifted a number of key restrictions on their rights. Women can now attend football matches, partake in sports themselves and by the summer will be allowed to drive cars.

Saudi Arabia is still one of the most restrictive countries for women in the world. The deeply conservative kingdom has no women ministers and retains a guardianship system requiring women to have a male relative’s approval for important decisions.

But with even that being chipped away, it is hard to overstate how much Saudi women’s lives are being transformed.

In Jeddah’s historic district, smiling women wearing traditional full-length robes adapted for sports cheered and one even skipped with joy as they pounded through the sleepy alleys past puzzled shopowners.

The government introduced physical education for girls last year and began licensing women’s sports clubs, but Saudis are still coming around to women running in public.

“This is just the beginning of a revolution for women in Saudi Arabia. In jobs, in our lives, in society, everything is going to change for Saudi women,” said one of the joggers, university student Sama Kinsara.

Kinsara is studying film, a major she will be able to use at home this year as Saudi Arabia lifts a 35-year-old ban on cinemas.

Yasmine Hassan, a member of the Bliss Runners group organizing the event, said it was aimed at empowering women.

“This is a message that we would like to send them and say, ‘Come, you’re not alone, we will do this together and the time is now’”.

“Hopefully by next year there are going to be way more rights given to Saudi women, the ones that we deserve,” she said.