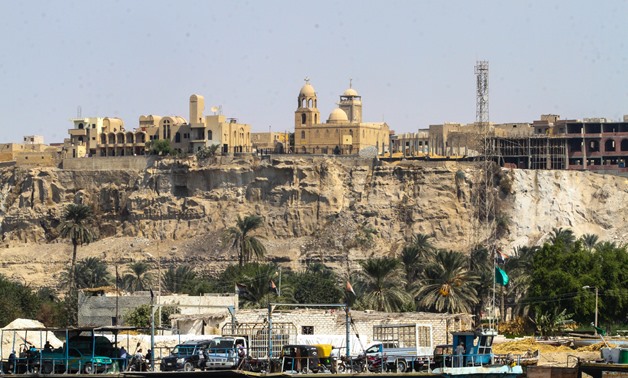 MINYA, Egypt – 15 November 2017: The Holy Family visited Gabal et-Tayr village in Minya during their flight into Egypt. The area was named Gaba et-Tayr (mountain of the birds) after its most important monastery.

Most residents work in quarries which surround the village from all directions. They are tough workmen who retrieve marble and white granite from the mountains, while few of them work as peasants. All residents are Christians, since the last three Muslim families left the village to another Muslim-majority village. When they decided to leave, Reverend Bafnotious asked them, “Why did you decide to leave? Did anyone bother you?” Malak, a resident of the village told us this story on the ferryboat. He said that the Muslims just wanted to join their in-laws in a nearby village, so they sold their land and left. Nobody bothered them; we have all been neighbors for many years.

Many people got into the ferry. Some of them were going to the quarries, while others were transferring vegetables, fruits and goods. We could see the crosses of Gabal et-Tayr Monastery in the distance, like plants sprouting in the wilderness.
As the ferry got closer, we saw the small stairs of the monastery carved into the mountain.

On our way to the Southern bank of the Nile, we pondered the story of the Holy Child who was sailing down the same river more than two thousand years ago when someone screamed as he saw a rock falling down the mountain towards him, but baby Jesus could stop the rock from falling, carving his tiny hand on it. The mountain was thus called Gabal al-Kaff (Mountain of the Palm), before it was changed to Gabal et-Tayr (Mountain of Birds). The name refers to all those strange birds that migrate annually to the mountain and do not leave it until they die.

One of the entrances to Gabal et-Tayr Monastery, Minya Oct. 14, 2017 – Maher Eskandar

When we got off the ferryboat, we saw the road to the village with a lot of stacked white sand. It seemed like it was in the process of being paved. The car took us through the streets of the village; then through a one-kilometer road to the monastery’s main gate where we entered the world of the Holy Family once more.

The gate of the monastery led to a sandy courtyard. To the right, there was a booth selling Christian souvenirs and books; it was run by a nun who went about her daily work while reciting Christian hymns. We could also see policemen securing the monastery and carrying out their national duty; one of them was performing Al-Asr prayer, an afternoon prayer for Muslims, when we got there. And several antiquities inspectors were sitting near the ancient church’s gate.

“Our church is special because it is the only church built inside the mountain. It used to be one rock and now it is four rocky walls; in the cloister, there used to be 10 rocky pillars. In 1938, the church was restored and the second and third floors were built,” said Reverend Sawfilos. He also indicated that the rock where Christ’s palm was imprinted used to be in the monastery, but then during the British occupation, it was stolen and never returned. However, it is preserved in a U.K. museum.

"In 328 A.D., Empress Helena, mother of King Constantine I, came to the mountain. When people told her that the Holy Family passed by this area and hid in the cave, she ordered that the rock around the cave is sculpted into the architectural style of Orthodox churches. She called it the Virgin Mary Church," continued Reverend Sawfilos. He indicated that the monastery consists of five churches; they are the Virgin Mary Church (the ancient church), the Holy Family Church, Saint Joseph Church, Saint Salome Church, and finally, Al-Hurub Church (the flight), which reminds Egyptians of the difficult journey taken by Christ in their country.

As we went into the church, we were fascinated by the icons on the walls. Some icons were ancient, and others were brought in by Christians seeking to be blessed. On each icon, you could see the name of the person who presented it to the church, written in a small font. In a small corner of the church, you could see the Virgin’s shrine in the heart of the mountain, where lovers of the Virgin left their prayers, hoping she will deliver them to the Heavens. You could also see a box for donations; the Virgin loves those who give. The money goes to the poor of course.

A man going down one of the staircases of Gabal et-Tayr Monastery, Minya Oct. 14, 2017 – Maher Eskandar

There was a recent icon of the Virgin with stars surrounding her as she is the "Second Heaven" in the Bible. She had a wreath on her head because she is a queen, and around her, there were pigeons, because pigeons symbolize her. Therefore, this icon shows many names given to Mary in the Bible. They are more than 100 names, and the most important ones are, “the highly favored,” and “the pigeon,” as simple people love to use these names.

On the wall, there was an icon of the Holy Martyrs of Bethlehem. The Reverend told us that they were the children killed by King Herod and his soldiers as they were looking for Baby Jesus among the newborns. In the middle of the church, there was a rocky pillar, with a baptismal font sculpted into it. The Reverend said the font is not used today for fear of it collapsing.

A view of farmland from the top of Gabal et-Tayr Monastery, Minya Oct. 14, 2017 – Maher Eskandar

We left the rocky church and went to Al-Hurub Church, recently built on the mountain, featuring a huge dome. Next to it, there was another cave leading to the stairs we saw outside of the monastery, called the "Virgin’s stairs." The attendant told us that these stairs used to be the only way one could get into the church in the past. As for this mysterious cave, the attendant told us that it blesses women who are having difficulty getting pregnant; women enter the cave from the right side and leave from the left side more than once while calling on the Virgin.

Above the cave, there was what the Reverend called al-bakara, which is an old piece of machinery used to lift groundwater at mountain to the top, but the water dried up after the practice stopped.

We took a few flights of stairs to the modern buildings in the monastery; then we found ourselves on top of the mountain, and we could see the many agricultural fields surrounding us. We also saw the palm trees growing in the middle of the rocks with remarkable resilience to survive.

We left the monastery and crossed to the West Bank, following the steps of the Holy Family again. They did not stay in the villages of Assiut for long, but they got to the spot where Deir al-Muharraq, the first church in history, was built.