Egypt’s Wahid Hamed: The professor of art and life 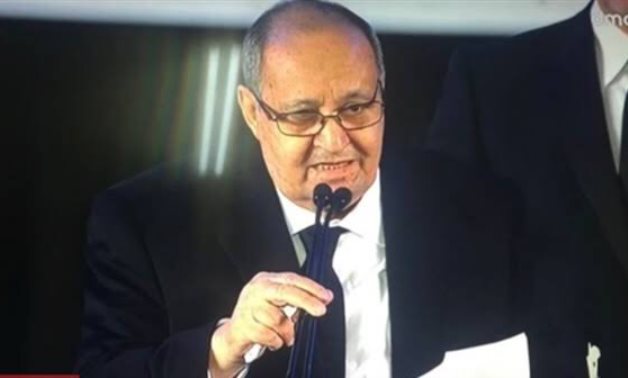 CAIRO - 2 January 2020: For his fans, colleagues and students he was the professor not just in art but in life as a whole.

He served as a compass for millions who were inspired by his words, ideas and beliefs. Many people read history, others make history and very few write history and he was one of these few who wrote Egypt’s history with integrity and love.

He created worlds, characters and experiences that formed the awareness of generations.

His illustrious career and immeasurable contributions to Egyptian cinema will make the legendary scriptwriter Wahid Hamid alive despite his death.

Those who know him in person and others who don’t felt the bitterness of sadness after losing him.

Cairo International Film honored Hamed in the opening ceremony of its 42nd edition with the Golden Pyramid Award for Lifetime Achievement for a career that spanned over five decades, during which he wrote over 40 films and 30 television and radio series, most of them garnering commercial and critical success.

During CIFF opening ceremony Hamed thanked god, and thanked all the attendees  because they love cinema adding that he loves cinema a lot.

“ I wouldn’t have been here without your love and support” Hamed said.

“ I lived in a beautiful era full of veterans and worked with great directors like Samir Seif and Atef el Tayeb” Hamed said.

“ I love you all and would like to thank my son Mohamed Hefzy” Hamed said.

Hamed said that he worked with actresses from different generations like Yousra, Mona Zaki, Nabila Ebeid and Menna Shalaby.

“I wish Egypt to continue glowing with art and cinema” Hamed said.

His honoring was a demonstration of deep love, he was saying goodbye to his colleagues, students and to his ultimate passion which is art and cinema.

Artists and cinephiles turned out in unprecedented numbers in a show of love and appreciation for the legendary screenwriter, during his seminar  which carried the name of “ Falahna el Faseeh” that was held on December 6 on the sidelines of Cairo International Film Festival.

“ I didn’t discuss any topic unless I am totally convinced with it, whether I am right or wrong” Hamed said.

Elham Chahine said to Wahid Hamed during his seminar: “You have changed the bases of cinema.”

The iconic screenwriter said that he worked with young directors to renew his thoughts, among them is his son Egyptian director Marwan Hamed.

“ You didn’t live in the era of Wahid Hamed, but Wahid Hamed is the one who lived in your era” Hamed said to the seminar attendees.

Hamed said that the one has to feel the reality, in order to be able to deliver it on screen.

Laila Eloui to Wahid Hamed: “ You added a lot to the Egyptian society and made the society love our dreams.”

His works have won numerous awards in festivals locally and internationally.

Two of his films were picked for the acclaimed list of the best 100 Egyptian films in the 20th century; Sherif Arafa’s ‘Al-Laab Maa al-Kobar’ (Playing with Giants, 1991) and Atef El-Tayeb’s ‘Al-Baree’(The Innocent, 1985).

The list was based on a poll of Egyptian critics under the supervision of the late Saad Eddin Wahba, former director of the CIFF’s 20th edition.

Hamed has added a lot of weight to the title of “screenwriter” in Egypt.

Hamed was always loyal to the Egyptian street.

Throughout his journey with writing, he was inspired by people and their ideas recreated his work.

He said that the secret to deal with people is to be honest with them and never deceive them.

Wahid Hamed is considered one of Egypt’s most renowned writers not just in Egypt but in the Arab world as well.

Hamed received a Bachelor of Arts degree in Sociology in the late 1960s, before embarking on a career in screenwriting.

His first strong and successful work was "Ahlam al-Fata al-Taer" (Dreams of the Flying Boy) released in 1978.

This famous television series was the start of his longtime cooperation with the legendary Egyptian actor Adel Emam.

Since then, both Hamed and Emam began an artistic partnership that produced many iconic, unforgettable films.

Among their most famous movies together is "Al-Erhab wel Kabab" (Terrorism and Kebab) in 1992, which is a black comedy discussing government corruption and the sufferings of the middle class in Egypt.

Hamed also established a production company titled Wahid Hamed Film Productions, to produce his and others’ works. He has worked alongside many veteran Egyptian directors in over 40 films and numerous TV series including Yousry Nasrallah, Atef al-Tayeb and Sherif Arafa, among others. America Abroad Media (AAM) honored Hamed and his son famed director Marwan Hamed, celebrating their respectable careers.

AAM honored Wahid Hamed and his son, Marwan Hamed, at its sixth Annual Awards Dinner on November 7, 2018 in Washington, D.C.

This annual Media Award recognizes individuals whose work demonstrates a strong commitment to purpose driven content, and who appreciate the unique power of media as a catalyst in informing, inspiring and positively impacting society.

“AAM is proud to honor the Hameds and shed light on their important careers at our Awards Dinner in Washington this fall,” said Dr. Aaron Lobel, founder and president of AAM.

AAM believes that the collective works of both Wahid and Marwan Hamed has succeeded in providing American audiences with a glimpse into the history of the Egyptian entertainment industry, act as a catalyst for social dialogue, hold powerful resonance throughout the Arab world, and lift taboos and bring forth positive change.

“The spirit of the Hameds’ work strongly complements AAM's mission, which is to empower and support local voices that convey universal values through creative content and media programming,” Lobel added.