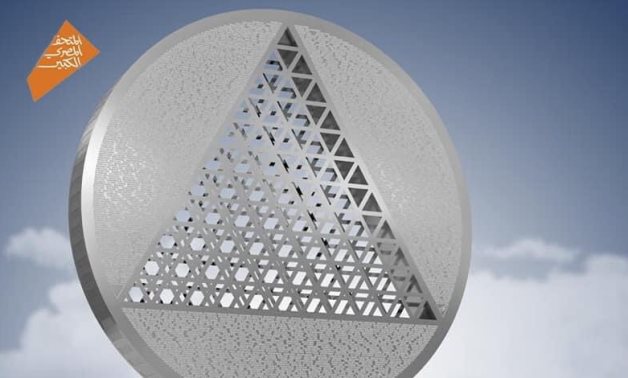 File: The Egyptian-Japanese symbol of friendship.

CAIRO - 12 December 2020: In the framework of continuous communication and cooperation a joint proposal between the Egyptian Embassy in Japan (under the direction of Ambassador Ayman Kamel) and Grand Egyptian Museum Project (under the direction of Major General Atef Moftah, the General Supervisor of the GEM Project and Surrounding Area) was undertaken.
They proposed an idea to promote GEM before the official opening by creating a symbol of friendship which will be sponsored and marketed by the Egyptian Embassy in Japan through magazines as an innovative way of encouraging people in Japan to visit Egypt and GEM. The idea was presented to the museum’s Board of Directors and was made supported from initial process steps to the promotional plan, final design and approval.
The General Supervisor of GEM prepared the design of the friendship symbol, a shape that merge a symbol shared by both Egyptian and Japanese civilisations, the sun disk with the unique facade of GEM'.
Following endorsement of the design by the board, the promotional plan was put into action.
It was agreed that Egypt International Station magazine, headquartered in Japan under the direction of editor-in-chief Mr. Abdel-Rahman Yunus, would implement the promotional campaign.
The magazine participated in a competition in which 475 magazines from all over Japan took part.
The Egyptian-Japanese Symbol of Friendship won first prize for its distinguished design and the associated promotional campaign.
A triumph as this is one of the most important prizes awarded by the Japan Tourism Authority.
Moftah received on behalf of the Grand Egyptian Museum’s Conservation Centre two ISO certificates: a certificate of accreditation of international standards for environmental management systems (ISO 14001: 2015) and certification of the international standard specifications for the quality management systems (ISO90
The certificates were presented by Engineer Mohamed Habib, General Manager of OSS Middle East and Dr. Tarek Rizk, consultant of OSS Middle East and witnessed by Dr. Hussein Kamal, General Director of the GEM Conservation Center, Dr. Eissa Zidan, Director of Executive Affairs of GEM Conservation and Transportation, and Dr. Elshimaa Eid, Head of Health and Safety at GEM.
These two certifications are in addition to the ISO certificate for occupational safety and health (ISO45001: 2018) which the museum had obtained last September.
GEM has obtained three ISO certificates in less than 60 days, the first time a museum obtains these three certificates at both the regional and international level.
These achievements serve as confirmation to the constant efforts of the Grand Egyptian Museum to apply all international scientific standards, such as quality assurance, planning, performance evaluation, as well as achieving environmental sustainability.
Obtaining these ISO certificates shows the positive impact the museum has in the area and it is hope this will continue to be reflected in local and international tourism, as GEM leads the way in occupational health and safety, environmental sustainability and quality control, mechanisms specially designed to measure and ensure visitors’ satisfaction.
It is worth noting that the museum had issued a booklet entitled ‘We Have Never Stopped Facing Corona’ to document all actions taken in this unprecedented global pandemic.
Egypt’s Minister of Tourism and Antiquities previously announced that the Grand Egyptian Museum will be inaugurated on June,2020.