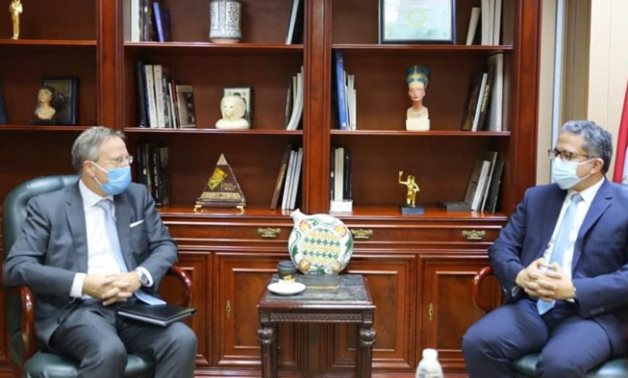 CAIRO – 25 October 2020: On October 25, Egypt’s Minister of Tourism & Antiquities Khaled el-Anani received in his office at the ministry's headquarters in Zamalek, Ambassador Sven Ouling, the new ambassador of Denmark in Cairo, who was keen to meet the minister and get to know him in his first official meetings after assuming his duties as ambassador to his country in Cairo.

During the meeting, they discussed ways of strengthening cooperation between the two countries in the field of archaeological work, training archaeologists and restorers, in addition to attracting more inbound tourist movement from Denmark to Egypt.

Also, during the meeting, a proposal to hold temporary exhibitions between the two countries was discussed.

For his part, the ambassador congratulated Anani on the announcement of the unveiling of the colorful Saqqara coffins, which the ministry announced in early October, pointing out that he was hoping to attend this new archaeological discovery, but his job duties prevented him from attending this gr