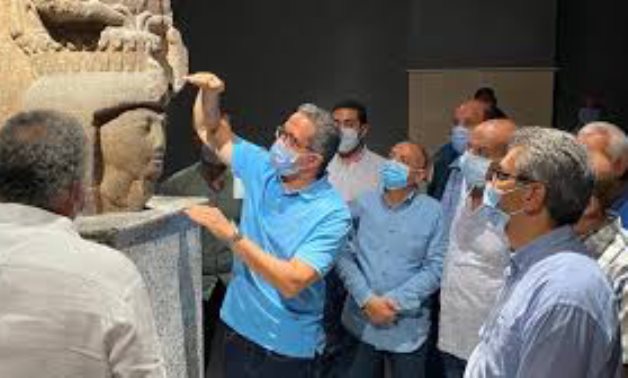 CAIRO – 7 October 2020: Egypt’s Minister of Tourism & Antiquities Khaled el-Anani is keen to wear a face-mask while inspecting archaeological sites and museums across the country. The minister's keenness to wear a mask was noted during his tour of the various halls of the Egyptian Museum in Tahrir, to follow up its development project.

During the tour, Anani chose a group of 118 artifacts to shoot a film of and to highlight some of the artifacts that will be displayed in the museum after the completion of its development project. Anani also appeared in the ministry's various conferences or official meetings wearing a face mask.

The minister’s keenness to apply the precautionary measures was also clear during the announcement of the largest archaeological discovery in the Saqqara Necropolis area, that was accomplished by the Egyptian mission headed by Mostafa Waziri.

The mission managed to extract 59 coffins and the number is still expected to increase.

In order to serve as an example for officials to apply the safety precautions, Anani was keen to wear the face-mask during his meeting with Ambassador Han-Maurits Schaapveld, the ambassador of the Netherlands in Cairo.

Schaapveld was keen to meet the Egyptian minister as soon as he assumed his post as his country's ambassador in Cairo.

The Egyptian Ministry of Tourism and Antiquities applied strict precautionary measures to its archaeological sites and museums nationwide during the COVID-19 epidemic.