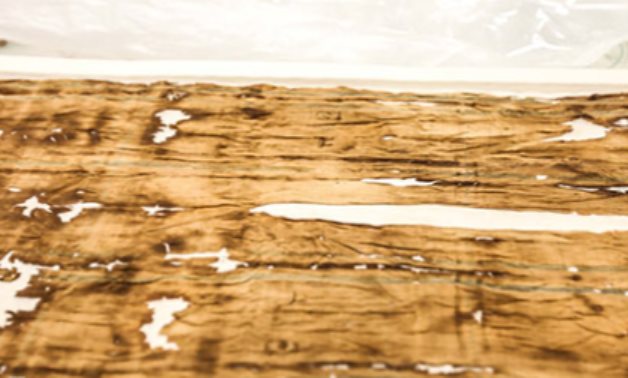 CAIRO – 15 September 2020: A scarf was recently discovered in King Tutankhamun’s tomb, and is now safely located in the Conservation Center of the Grand Egyptian Museum.

Sarah Ismail, a restoration specialist at the Grand Egyptian Museum, said that the piece was among the possessions of King Tutankhamun and was received by the Organic Antiquities Laboratory.

According to Ismail, at first glance the scarf appeared as an unclear mass, however, after the studies that are made on each piece the laboratory receives, the tests, analysis and imaging using the Yd and RI bulbs, it then becomes known whether the layers are coherent or not.

She explained that a work plan had been prepared, as the piece was in a moderate, and not bad condition.

Ismail also explained that it is possible to unfold the piece by using modern devices in the laboratory, such as the urtlas-quonk, which is a water vapor device, through which it can moisten the piece and spread it.

According to Ismail, the piece after spreading reached a length of about 4 meters and 80 cm and that the restoration took about three weeks.

After the piece was fully fitted to its length on the ground, another challenge emerged which is how to design a stand for that piece's length. There is no carton of this length, and therefore connections have been made inside the carton, said Ismail.

Ismail noted that the piece was stretched over a kind of fabric. “When the piece was unfolded, we discovered inscriptions on it in the front part of the scarf, which is currently being deciphered” concluded Ismail.