10 artefacts of Tutankhamun’s personal belongings to be displayed in Sharm El-Sheikh, Hurghada Museums 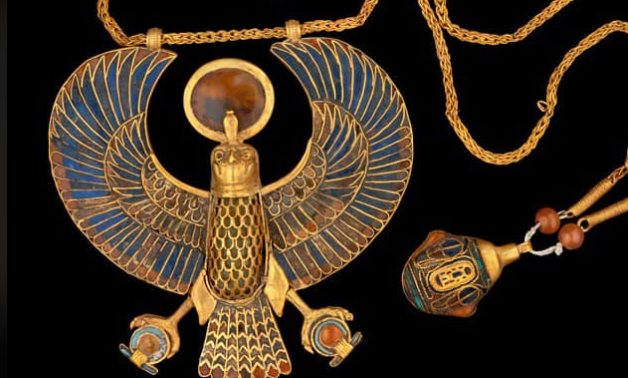 One of Tutankhamun's extraordinary belongings - photo via Egypt's Min. of Tourism & Antiquities

CAIRO – 30 August 2020: The Board of Directors of Egypt’s Supreme Council of Antiquities decided to temporarily display ten artifacts of Tutankhamun’s belongings in Sharm El-Sheikh Museum, which will be inaugurated 2020.

Another ten belongings of the Golden King will be exhibited in Hurghada Museum. Those artifacts were part of the exhibition "Tutankhamun ... Treasures of the Golden Pharaoh", that was held in London and recently returned to Egypt after achieving unprecedented success in its foreign stops that also included Los Angeles and Paris.

The statue of King Tutankhamun’s consort was chosen to be the main piece of the exhibition at Sharm El-Sheikh Museum.

On August 27, 2020, the 166 artifacts of the King Tutankhamun exhibition arrived to Egypt from London.

This exhibition had achieved great success in US and France, breaking the record of receiving more than 1,400,000 visitors during a six-month period in 2019.

Due to COVID-19, the exhibition was closed in London in March 2020, 44 days before the end of its scheduled period, as part of the precautionary measures that have been taken in Britain to combat the novel virus.

Accordingly, the Board of Directors of the Supreme Council of Antiquities decided to return the artifacts to Egypt On August 30, amid tight security measures and in the presence of Egyptian archaeologists.

The Board of Directors of the Supreme Council of Antiquities also decided to temporarily display 10 of these artifacts in Hurghada Museum, which was recently opened, and 10 others in Sharm El-Sheikh Museum, which will be opened at the end of 2020, to allow the visitors to see part of the treasures of King Tutankhamun to promote the new museums.