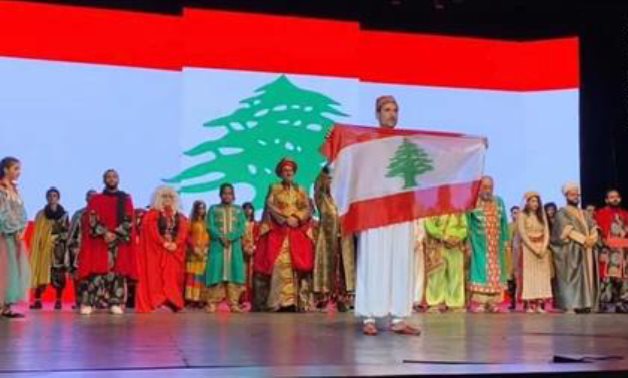 CAIRO - 7 August 2020: Egyptian megastar Ahmed Ezz hold the Lebanese flag in his hand at the end of “ Aladdin” play show to express his solidarity with Lebanese people.

Ezz asked the audience of his play to stand one minute of silence mourning Lebanese martyrs.

On Wednesday, President Abdel Fattah El Sisi offered his condolences to Lebanese counterpart Michel Aoun over the death of dozens in the explosion.

Egyptian Ambassador to Lebanon Yusuf Allawi announced on Wednesday that Egypt will open an air bridge to send urgent medical aid to Lebanon. The newly-opened air bridge will carry the required medicine and medical supplies.

“Aladdin” producer Magdy el Hawary dedicated. the revenues of the play first show after the halt of COVID-19 to Egypt’s White Army, referring to the medical staff battling the coronavirus.

"Aladdin" staged previously in KSA within the activities of Riyadh Season.

It is noteworthy that Ahmed Ezz is about to finish filming "El-Arif". The film co-stars Ahmed Fahmy, Mahmoud Hemeida , Carmen Basibes and others. It is written by Mohamed Sayed Bashir and directed by Ahmed Alaa.