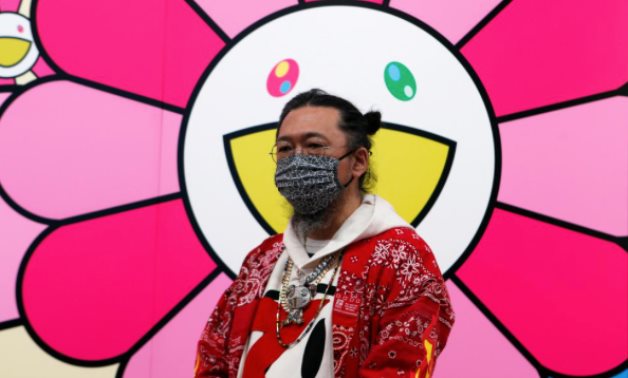 TOKYO (Reuters) - Some of Japan’s best-known artists are finding new avenues of expression in areas such as online communication and the environment, as the novel coronavirus outbreak sparks ideas as radical as renaming the country’s “Reiwa” imperial era.

Murakami, with works on display including his iconic life-size sculptures “Miss Ko” and “My Lonesome Cowboy” as well as two new 20 metre length paintings, said expansion of his online business since lockdown was helping him communicate more closely with fans.

“The museum exhibition was delayed and we’re still not in a situation where a lot of people can gather, but I think human beings need communication through art,” Murakami told reporters outfitted in mandatory masks and face shields.

“So I’m conveying various messages in detail online,” he said.

South Korean-born Lee Ufan, a resident of Japan since the 1950s and known for promoting the “Mono-ha” art movement, described the pandemic as a warning over the impact that human development was having on the environment.

He highlighted the improvement in air quality and freedom for wild animals to roam while the world was locked down.

“This is the turning point where we need to go back to nature,” Lee said.

Photographer Hiroshi Sugimoto, active in the United States since the 1970s, suggested turning the page on the pandemic by renaming the current Reiwa era, which began in May last year with the enthronement of a new emperor.

He noted that Japan in ancient times changed era names when there was a disaster or epidemic.

“We should immediately change the name Reiwa,” he said.

“It’s like a calling from the gods - Reiwa is not a good name!”

The exhibition, open to the public from Friday, also features works from Yayoi Kusama, Tatsuo Miyajima and Yoshitomo Nara.