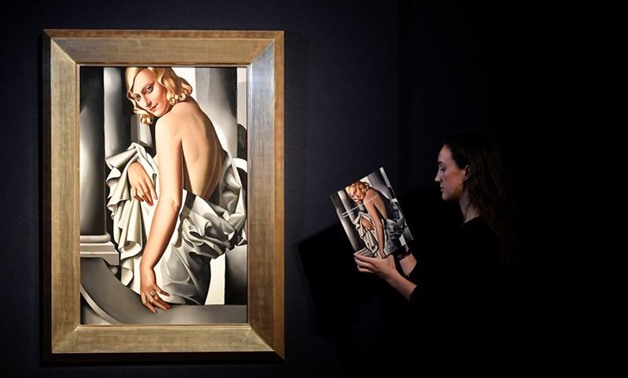 An employee poses as she views a sales catalogue next to 'Portrait de Marjorie Ferry' by Tamara de Lempecka ahead of Impressionist, Modernist and Surreal sales at Christie's auction house, London, Britain, January 30, 2020. REUTERS/Toby Melville

LONDON - 31 January 2020: Tamara de Lempicka’s “Portrait de Marjorie Ferry” is expected to fetch up to 12 million pounds ($16 million) when it comes up for auction in London next week.

The painting was commissioned in 1932 by the husband of British-born cabaret star Marjorie Ferry at the height of Lempicka’s fame in Paris.

“She was very much the sort of Instagram hero of her time,” said Keith Gill from auction house Christie’s of the Polish painter who appeared on many magazine front covers.

“It’s the first time we’ve ever had a female artist on the front cover of our impressionist evening sale catalogue, which we are very proud of,” Gill added.

Going under the hammer will be an Alberto Giacometti, “Trois hommes qui marchent (Grand plateau)”, also expected to fetch up to 12 million pounds, and George Grosz’s depiction of Germany at the close of World War One, “Gefaehrliche Strasse”, with an estimate of up to 6.5 million pounds ($8.5 million).