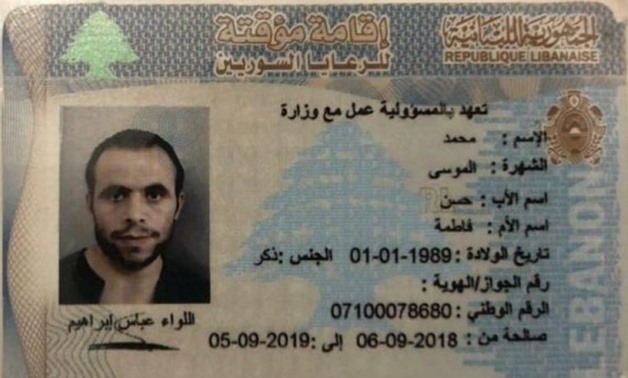 The document is a Lebanese temporary residency permit for a Syrian refugee. The date on the residency permit revealed that it had been invalid since September 2019. This indicates that the deceased robber’s stay in Lebanon was illegal, and that it would be impossible for him to be working in Agram’s villa as her husband would not allow that to happen since his residency permit was outdated.

This document caused havoc on social media platforms because it indicated that the deceased was staying illegally in Lebanon, especially after the Lebanese Government tightened the procedures for granting residency permits for Syrian refugees. Social media users mentioned that this by itself is proof that the deceased was not working in Agram’s villa, defying all claims that said otherwise.

The “leaking” of this document comes after the controversial statements made by the victim's wife on Jan. 14, saying that even if her murdered husband "was a thief,'' robbing the star and her husband would not affect them monetarily in any way, confirming that he was a very religious person and never thought of stealing. The wife went on to say that on the day of his murder, her husband took the toy gun of his child Hassan, stressing that anyone would easily tell the gun was not real.

Since the unfortunate incident happened in Agram’s villa on Jan. 5, numerous rumors revolving around the villa slain have been circulating. Fady el-Hachem and Agram have been eager to clarify all the rumors in an attempt to expose the truth. Concerned individuals following the case are in constant confusion since incompatible information emerges from time to time.