By: Mustafa Marie
CAIRO - 17 July 2019: The Ministry of Antiquities said that the first restoration works of King Tut’s golden coffin started after it was transferred from the cemetery to the Grand Egyptian Museum.

The Ministry of Antiquities began the restoration works of the wooden coffin of King Tutankhamen, which was transferred from the tomb of the King to the Grand Egyptian Museum a few days ago in preparation of presenting it in the Golden King Collection.

Secretary General of the Supreme Council of Antiquities Mostafa Waziri confirmed that the coffin was transferred after the permanent committee of Egyptian Antiquities approved the transport process at its June 2019 meeting.

Director General of Archaeological Affairs Al-Tayeb Abbas indicated that the coffin will be presented in King Tut’s collection at the Grand Egyptian Museum, with the rest of the other golden coffins, currently located in the Egyptian Museum in Tahrir and scheduled to be transferred to the Grand Museum.

For his part, Director General of the initial restoration and transfer of monuments at the Grand Egyptian Museum Eissa Zeidan explained that the restoration and maintenance of the coffin will take about 8 months, as the coffin suffers from cracks in the gold plaster layers and general weakness in other golden parts, adding that all damages have been documented and proven, creating a case report before the transfer.

The coffin was transported in the midst of high security procedures, under the supervision of concerned restoration workers and antiquities specialists, in cooperation with the Tourism and Antiquities Police forces.

All local and international media outlets will be invited within the next two weeks to witness the coffin's display at the Grand Egyptian Museum. 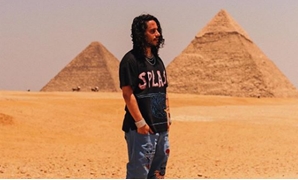