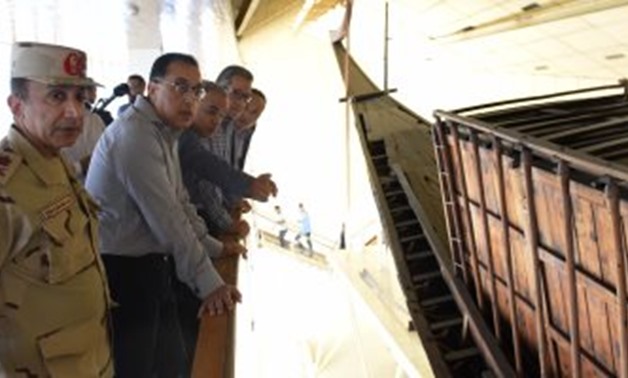 Madbouli during the visit - Egypt Today.

During the visit, the Egyptian prime minister inspected the proposed site for the transfer of the Khufu boats, and instructed that the transfer of experts and specialists should be studied, and that a high-level team in engineering and restoration affairs should do so.

The Minister of Antiquities explained that the project of the Grand Egyptian Museum includes the main museum building, the main square, the entrance of the main visitors, the Ramses hall, the conference building, the pyramids wall, the recreational park, the Nile Valley, the children's park, Khufu, Pyramids Restaurant, and Masala.

Anany added that the total area of ​​the project is 167 thousand square meters, and the implementation rate is 91.5%. The structural structure has been completed by 100% and the surrounding roads are over 90%.

And the entrance hall where the statue of King Ramses II is located is 92%, the great staircase is completed by 98% and the main display sectors are completed by 85%. The first field of the obelisk is standing in front of the facade of the Great Egyptian Museum.

Major General Atef Moftah pointed out that the paving of the roads surrounding the museum was completed from the east and west, and the northern and southern roads were implemented by 90%.
The design works for the construction of the Fayoum Road Tunnel with a length of 1200 m were completed in two directions, consisting of 6 traffic lanes in each direction In addition to the tunnel for the protection of facilities and drilling has been started, and the evacuation of the presence located south of Fayoum road is underway.

He said: "There are procedures to develop other ways that serve the great museum, the most important of which are the beginning of the Mansuriya road with the ring road, the roads of Mansuriya, Fayoum, Haram, Faisal, and the road ahead of the officers' homes.

Madbouli stressed that efforts should be exerted to speed up the completion of this historical building, and that all works should be meticulously executed so that the great museum will be a message to the whole world about the new Egypt, which continues to make a present and a better future for its people.