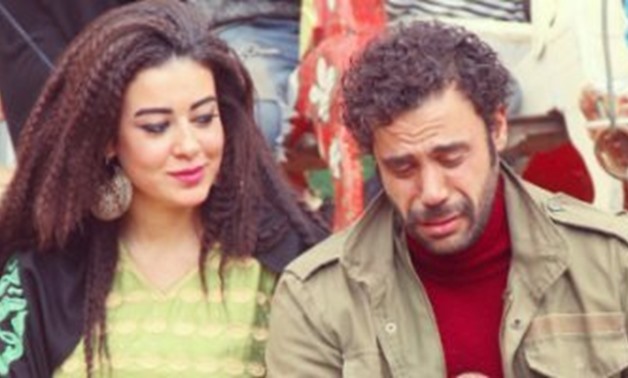 Mohamed Emam, Mirhan Hussein in a scene in "Hogan:

CAIRO – 13 May 2019: "Hogan" episodes are all trending on Twitter. "May God always grant me success; each episode of 'Hogan' is trending," commented Egyptian star Mohamed Emam on his Instagram account.

The seventh episode of the series witnessed Hogan ( Mohamed Emam) and Nouga ( Asma Abul Yazid) wedding party, after he escapes from the death scene of Kawthar -Inaam Salousa. Kawthar died after Bahloul threatened her with a knife to tell him the whereabouts of his wife Warda.

Hogan entered Kawthar’s house to find her dead in the crime scene. Warda enters the house shortly after Hogan’s arrival, thinking that he is the murderer. This drove Hogan to flee. During his escape, one of the men working for Ramadan shoots and injures him in his shoulder. This forces Hogan to head to Nouga’s house to help him treat the wound.

“Hogan” starring Mohamed Imam is broadcast on Al Hayat TV at 10:30 p.m. during the holy month of Ramadan. "Hogan" is a social/action series that revolves around a tough young man who is gifted with numerous talents and skills and comes from a shabby neighbourhood. Hogan is able to chew glass and pull a car using his teeth.