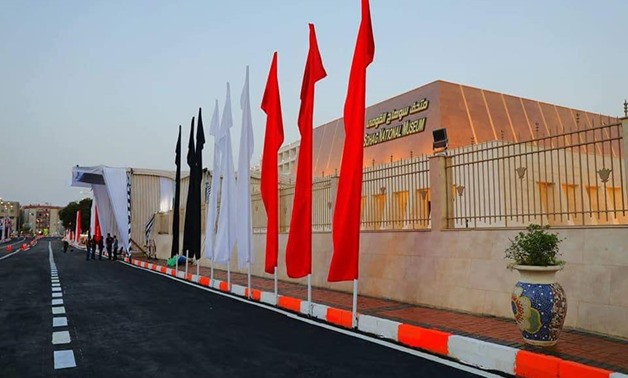 
CAIRO – 13 August 2018: The Sohag National Museum which overlooks the Nile in the Upper Egyptian town of Sohag was finally inaugurated by Egyptian President Abdel Fatah al-Sisi on Monday.

In 1989, the foundational stones of this museum were first placed. In 1991, the designs and architectural drawing began and the first contractor received the project in 1993. The project was set to be completed in 1995 but this didn’t happen because the museum launch was halted several times due to technical and interior design issues as well as the lack of financial resources.

In 2016, work resumed on the museum, and finally the museum was completed in 2018.
“The Sohag National Museum [SNM] is not just a regional museum that the Ministry of Antiquities is opening in an Upper Egyptian province; the museum is part of the country’s strategy to improve the Upper Egyptian governorates and develop their resources,” Minister of Antiquities Khaled el-Enany told Al-Ahram Weekly.

The museum, spanning over 8,700 square meters, was established to look like a two-storey ancient Egyptian sanctuary, overlooking the Nile with a dock for boats. Five huge statues of the lion goddess Sekhmet are placed at the entrance of the museum.

Although Sohag governorate possesses plenty of historical archaeological sites, valuable rare monuments and distinguished landmarks from the ancient Egyptian era, as well as the Ptolemaic, Graeco-Roman, Coptic and Islamic eras, it was rarely visited.

The Sohag Museum was established to encourage the governorate’s archaeological sites and receive more tourists to visit the museum as well as other monuments in Sohag.

The Sohag Museum will portray the Egyptian identity through highlighting the changes that occurred in Upper Egypt generally and Sohag particularly.The museum will show six aspects of life in Egypt throughout the different eras, focusing on family, the different cooking methods and cuisine, beliefs and religion, employment, and handicrafts.

The number of archaeological pieces on display in Sohag Museum is about 1000 artefacts, most of which were uncovered in different archaeological sites near Sohag and the rest were selected from the Egyptian Museum in Tahrir, Cairo's Museum of Islamic Art, the Textiles Museum and the Coptic Museum.

The Sohag Museum’s displays include a number of clay pots, small bases and a group of jars and different sizes and shapes of painted lamps made of clay. The museum also hosts a selected group of paintings showing men and women bathing in the Nile River.

A small Persian manuscript pertaining to heritage and an iconic romantic story of Qays ibn al-Mulawah and Layla known as "Layla and Al-Majnun" are also on display in the museum.

Pieces of cloth decorated with earthenware ceramic beads, the remains of children’s linen gowns, and a rectangular piece of Kaaba Kiswa which is the fabric covering the Kaaba in Mecca are also among the museum displays.

The Ministry of Antiquities was keen to display objects that truly reflect Sohag’s traditions, customs, industry and handicrafts.This museum contains archaeological artefacts of various ages. According to Elham Salah, head of the museums sector in the ministry, the museum has a basement containing artefacts that show the religious ideology of ancient Egyptians.

There are also statues of kings and artefacts that shed light on the customs and traditions of families in the past, such as the textile industry in the city of Akhmin.

Salah expressed that the museum is not only going to display artefacts for the sake of entertainment, but it will also be organizing educational and cultural workshops for children to raise their awareness on the heritage of their ancestors.

Some workshops will also teach young adults and women how to make traditional crafts, especially textiles that happens to be famous in Sohag. Ayman Abdel Moneim, governor of Sohag, explained that this national museum represents a strong boost for tourism in the governorate.

The head of Administrative Control Authority also reviewed the stages of the Sohag National Museum construction, noting that the museum’s idea came to effect in light of the state’s strategy to develop and encourage Nile tourism.

“The foundation stone of the Sohag Museum was laid in 1989 until the president issued instructions to complete the project. It was completed on an area of 870 square meters and at a total cost of LE 72 million,” the head of Administrative Control Authority stated.

Ministry of Antiquities aims to transform Egypt’s museums into more educational, cultural and productive hubs. Sohag was the town where the kings of early dynasties lived that’s why kingship is reflected in the first section of the new museum. The most important object in this section is Pharaoh Ramses II colossus. Ramses II was one of the most influential kings in ancient Egyptian history and his temple is located in Abydos, Sohag.

The Sohag Museum's second section portrays family life in Upper Egypt, and the main object in this section is an ancient Egyptian couple statue representing family unity.
The third section of the museum is dedicated to cooking and cuisine to show ancient Egyptians' multiple, developed recipes.

This section also contains food punnets and cooking tools, in addition to the designs of kitchen furniture and dining tables.

To make it easier and more informative for visitors, labels and graphics explaining the museum's objects are featured in the museum's different halls. The visitor's route in the museum is provided with ramps to facilitate the visit for disabled people.

“The most-distinguished object in the museum is a Sixth-Dynasty statue of an army leader called Wini, the first known military leader in the ancient Egyptian army,” Salah told the Weekly, adding that reliefs of Seti I and a statue of his son Ramses II are also among the important objects exhibited in the museum.

The museum’s interior design has been inspired by Sohag's natural environment. The museum walls are dark green to symbolise Sohag’s agricultural nature, while the showcases are light beige to represent Sohag’s dessert.

The Sohag Museum includes an audio-visual hall to provide visitors with the needed information as well as a library and a lecture hall.

Egypt Today will provide its readers with a documentary about Sohag Museum.