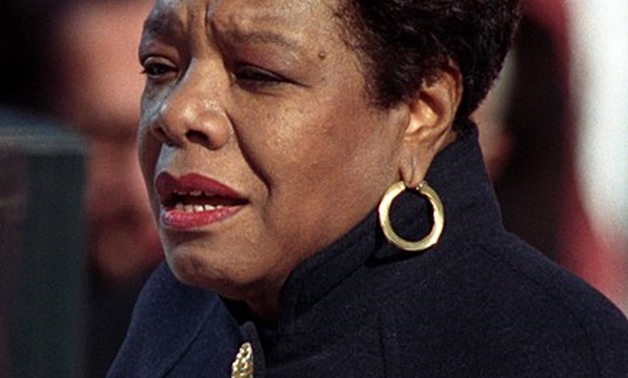 Angelou charted her eventful and perturbed life in a significant series of memoirs that have been exceptionally received by the world in her autobiographical series “I Know Why the Caged Bird Sings”, which was later turned into a movie with the same title. “I Know Why the Caged Bird Sings” had a very influential impact due to its exceptional portrayal of many edgy issues experienced by African Americans, such as racial discrimination, sexual abuse and violence.

All the harsh challenges she encountered made Angelou an astonishingly powerful woman. In the third book of her autobiographical series, "Singin' and Swingin' and Gettin' Merry like Christmas", Angelou tells the readers everything about her previous jobs that were totally irrelevant to her various artistic interests; she used to work as a car conductor and a shake dancer in nightclubs.

Deeply inspired by black authors like Langston Hughes, W. E. B. Du Bois and Paul Lawrence Dunbar, Angelou focused her efforts on defending the lives of black people in America from the time of slavery to the rebellious 1960s, and her poems spoke loudly of her beliefs.

It is worth mentioning that Angelou had worked in Cairo as an editor with South African Civil activist Vusumzi Make. She then moved to Ghana, where she also worked as an editor and met renowned civil rights activist and Muslim minister Malcolm X. Returning to America, Angelou was about to start working with Malcom X's Organization of Afro-American Unity before was murdered.

Her poems were considered an idealistic depiction of black beauty, the strength of women and the human spirit. Through her poems, Angelou also stood successfully against the Vietnam War and called for social justice, which was reflected in her poem "Yet Just Give Me a Cool Drink of Water 'fore I Diiie".

One of the most remarkable moments in her life was when she read the poem “On the Pulse of Morning” at Bill Clinton’s presidential inauguration. With her mind-blowing presence and performing skills, Angelou won three Grammies for spoken-word albums.

Marking a noteworthy stage in her filmmaking career, Angelou directed "Down in the Delta", which starred Wesley Snipes, who is known for various action films such as "Demolition Man" and the "Blade" trilogy. "Down in the Delta" featured a family tragedy that revolves around drugs, race, prejudice and redemption.

In 2011, President Barack Obama awarded Angelou the Presidential Medal of Freedom, in addition to more than 50 honorary degrees. She also worked in two presidential committees, for Gerald Ford in 1975 and for Jimmy Carter in 1977.

As diversity was a common feature in her literary career, Angelou wrote numerous books for children, such as “Life Doesn't Frighten Me” (1993), “My Friendly Chicken, and Me” (1994) and “Kofi and His Magic” (1996), among others.

Angelou’s poetry collections include "The Complete Collected Poems of Maya Angelou" (1994) and "Phenomenal Woman" (1995), which is a collection of four poems and takes its title from a poem that originally appeared in Cosmopolitan magazine in 1978.

Angelou once said, “My mission in life is not merely to survive, but to thrive; and to do so with some passion, some compassion, some humor and some style.”