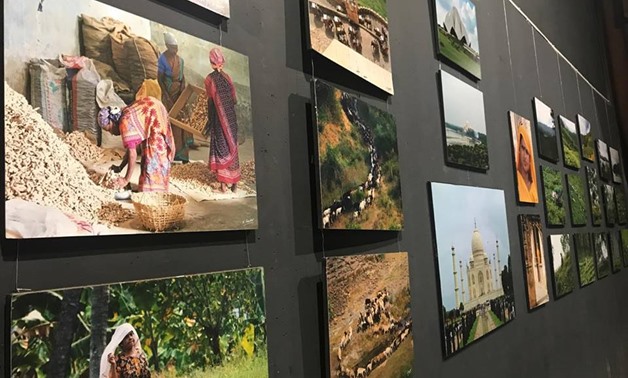 As part of the “India by the Nile” festival events, the Indian ambassador to Egypt invited the Egyptian photographer Gawdat to showcase his photography on India. Through “People and Places” exhibition, Gawdat exhibited photographs of numerous natural scenes and portraits of Indian people among other photographs. The exhibition was held on Wednesday March 14 at El Sawy Culture wheel and attended by Talaat and the exhibition’s guest of honor, the Indian Ambassador to Egypt.

“Documentary photography has successfully shed light on many unknown Indian regions specially in 1900s and 1980s," Talaat told Egypt Today, adding that he was among few photographers who took the initiative of travelling to India with the aim of documenting its diverse beauty at that time.

Talaat exhibited for the first time at the Cairo Cultural Center in which he showcased his art work featuring India’s magnificence from many angles. This exhibition specifically, has been positively perceived by photographers all over the world, encouraging them to pay homage to India’s natural beauty.

“India is considered to be a helpful platform for photographers due to its diversity whether in locations or in its stunning nature,” Talaat said, clarifying that for instance, India’s east completely differs from its west.

In the “People and Places” exhibition, Talaat expressed his admiration towards Gawdat’s artwork saying that he is one of the most prominent amateur photographers in the Arab world. Despite his medical career, he still manages to take almost 100,000 photographs per year whether they be of local or international places.

“Photographing foreign places from an Egyptian perspective usually has a significant grasp”, he says, emphasizing that each photographer can capture the same place in their own way and is deeply and subconsciously influenced by their own culture.
In order to be able to truthfully categorize a photograph as a documentary one, the picture should be telling a specific story or delivering a strong message that depicts either the photographer’s experience or his knowledge.

Usually photographers get attracted to elements that they rarely see in their homelands. Clarifying this concept, Talaat said that for instance, if a photographer is used to living in a desert environment, he will find himself looking predominantly for natural colorful landscapes and elements.

Being a prominent surgeon wasn’t an obstacle to being able to express his deep love for photographing all the countries he has been to, his friends’ weddings and random people he meets in different places.

As long as one’s doing what he loves the most, he will be productive in other fields and Gawdat’s experience can be a real life example of this conviction.