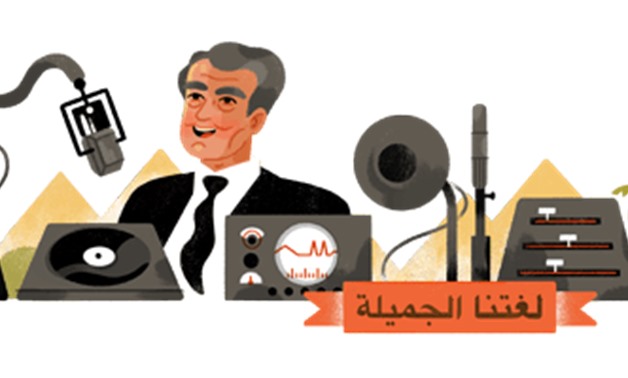 CAIRO – 9 January 2018: Legendary Egyptian poet Farouk Shousha was chosen by Google to be honored with a Google Doodle to celebrate the iconic artist’s 82nd birthday.

For years the program was the main haven for Arabic language lovers. The great late poet, who was born in 1936 in Damietta, had a melodious voice, mesmerizing his listeners. His deep thoughts, mixed with his fine selection of words, made him for many generations the window of poetry and literature.

Shousha was famous with his dazzling way of reciting poetry in a unique manner. He also presented for years the popular cultural TV show “Omsiya Thaqafia” (Cultural Evening).

The first volume of Shousha's “Collected Poems” was published in 1985, and the second volume in 2007. Shousha published 13 poetry anthologies and was granted the Nile Prize for Literature in 2016.

Shousha’s verse was alluring, tender and catchy. His romantic poems expressed feelings of love and emotions in a soft and dignified manner. Shousha chose topics that reflect the ordinary man, his struggles and sufferings.

His deep love for Egypt is a characteristic feature of his poetry and all his writings. He was a unique poet, full of wisdom.

Shousha, who was the president of the Egyptian Writers’ Union at the time, died on October 14, 2016. A number of distinguished people mourned him on the day of his death, including Sheikh Mohammed bin Rashid, ruler of Dubai and Vice President of the UAE. Shousha will live immortally between the words he wrote for the people.