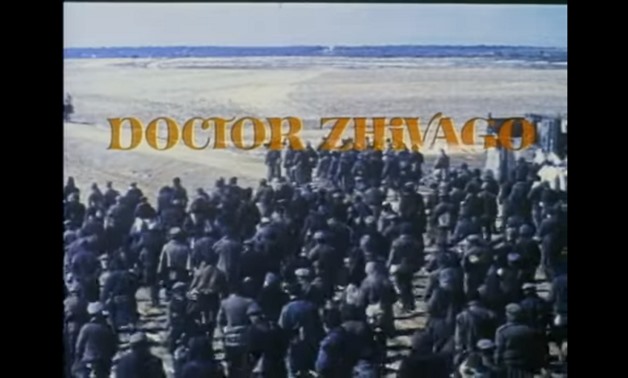 CAIRO – 22 December 2017: December 22, 1965 marks the premiere of “Doctor Zhivago.” Starring Omar El-Sherif and Julie Christie, this historical epic is hailed as one of cinema’s greatest love stories and is in the top 10 highest grossing films of all time.

The film was adapted from a 1957 book by the Russian author Boris Pasternak, one of the most famous poets from the Soviet Union. Pasternak had to smuggle the book out of Russia in order to have it published in Italy, defying the Soviet government. The book eventually became the most popular novel of the late 1950s. Nearly a decade later, British director David Lean would step up to adapt the tragic tale into a grand, sweeping epic fit for cinema.

Set during the Russian Revolution in the midst of World War I, the story traces the life of Yuri Zhivago (Sherif), a young married doctor who encounters his old flame, Lara (Christie) a nurse whom he begins a passionate affair with. Political uprising and personal matters threaten their love and lives.

The film opens with Yuri’s half-brother, Yevgraf who also narrates the story, meeting a woman long after the events portrayed in the rest of the film. Yevgraf believes this woman might be the long lost daughter of his brother.

Lean took risks casting Sherif and Christie as the leading couple. Sherif at the time was only known for his performance in “Lawrence of Arabia,” while the British Christie had a bit more fame with her role in “Billy Liar.” Due to political tensions and Russia’s lingering anger at Pasternak, Lean had to shoot the film in Spain and Canada, which provided a range of landscape needed to capture the feeling of Russia’s untamed wilderness.

While audiences adored the film on its premiere at New York City and its wide released ten days later, critics were harsher on the film, complaining of the slow plot and melodramatic romance. Even though opinions of the film softened in the following decades and the film continues to be ranked highly with its re-releases, director Lean took the criticism to heart and all but quit directing.

Regardless, “Doctor Zhivago” would win a total of five Academy Awards, primarily for its incredible technical productions, and is still remembered warmly to this day as a magnificent love story set in the cold, harsh land of Russia.