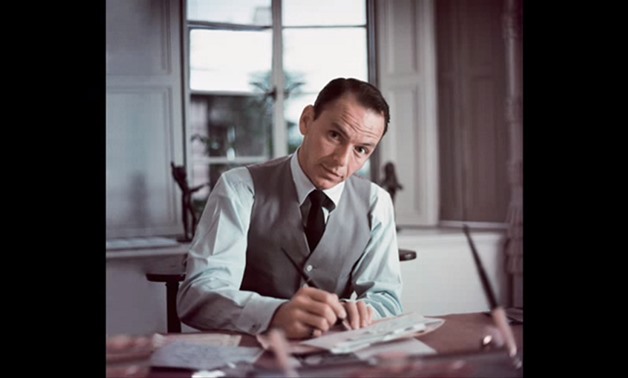 CAIRO – 12 December 2017: December 12 is the birthday of the “King of Swing,” Frank Sinatra; one of the 20th century’s most important actors and singers. From starring in beloved Hollywood classics to serenading the world with his timeless love songs, Sinatra’s done it all.

Sinatra was born in 1915 in Hoboken, New Jersey to a family of Italian immigrants. An only child, his father was a fire-fighter while his mother sang at social gatherings. Sinatra started off early in music, playing a ukulele his uncle gave him while singing on hot summer nights; one of his fondest childhood memories.


After hearing Bing Crosby perform during the 1930s, a young Sinatra decided that the life of a musician was the life for him. He soon dropped out of high school and began singing at night clubs. He got his break singing for radio as part of group called the “Hoboken Four” on the talent show, “Major Bowes and his Amateur Hour” in 1935. While the group toured the country, Sinatra was the only one serious about pursuing a musical career, and continued to sing long after the group disbanded.

His time on the radio brought Sinatra to the attention of bandleader, Harry James, who by 1940 had helped Sinatra make his first recordings, which helped the young singer establish a foothold in the music business, leading to his slow but steady rise to the top. After Tommy Dorsey invited Sinatra into his band, the two began topping the charts and after getting a taste of success, Frank decided to go solo, a move that would succeed beyond his wildest dreams. By 1942, he was a star.

Fans, particularly young women, grew hysterical whenever Sinatra made a public appearance and Sinatra had earned himself the title of “The Sultan of Swing” and even just “The Voice,” showcasing just how distinctive his singing talents were. Sinatra dominated the Swing Era, which lasted from the 1930s until the outbreak of the Second World War, which he managed to avoid being drafted into.


Sinatra also began to take an interest in acting, first appearing as an unnamed singer for 1941’s “Las Vegas Nights” and various other small film roles before his breakthrough in 1945 with “Anchors Aweigh,” a leading role alongside Gene Kelly. In 1945, Sinatra earned a special honorary Academy Award for his work on a 10-minute short film, “The House I Live In,” which was made to promote racial tolerance.

The end of the 1940s saw a drop in Sinatra’s once dazzling popularity, as rumors abounded that he had connections to the Mafia, coupled with his refusal to evolve with the times. He lost several musical and acting contracts and it almost seemed like the star’s career had finally began to fade, until his comeback in 1953. His role in “From Here to Eternity” won Sinatra an Oscar for Best Supporting Actor, putting him back in the good graces of the public.

That same year Sinatra signed a new contract with Capitol Records; his singing style had evolved to incorporate jazz, which was popular at the time. Having won the hearts of the public back, Sinatra enjoyed stable success throughout the years, at one point he starred in nine films in just two years. As his adoring teenage girl fan base grew older, so did Frank, and he now enjoyed a reputation as a suave, aging and mysterious bachelor, an image which helped him win over older fans.


The 1960s saw Sinatra star in films such as “Ocean's 11” in 1960 and “The Manchurian Candidate in 1962,” which were hugely popular at the time and would be remade later. He founded “The Rat Pack,” a popular group of actors composed of Dean Martin, Peter Lawford and Joey Bishop and Sammy Davis Jr. His debut at Las Vegas also made him a star attraction for Caesar’s Palace. He also received the Grammy's Lifetime Achievement Award.

As rock ‘n’ roll was taking hold, Sinatra feared his time was up, and had announced he’d retire in 1971 before recanting and continuing to record a few years later. Still, his voice just wasn’t the same, with time, smoking and alcohol taking their toll. By the 1980s, Sinatra had shifted his political allegiance from the Democratic Party to the Republican Party and was a staunch supporter of President Ronald Reagan, a close friend who awarded Sinatra the Presidential Medal of Freedom in 1985.

By the 1990s, Sinatra’s music career was still chugging along, having released the albums “Duets” (1993) and its follow-up “Duets II” (1994), his final recordings. The albums saw him sing alongside the most popular musicians of the time, including the likes of Barbra Streisand and Bono. He gave his last performance in 1995 in California and a few years later in 1998, Sinatra passed away of a heart attack in Los Angeles at the age of 82.


With a life as fabulous as his music, a voice that could soothe a nation and an acting talent that couldn’t be beat, Sinatra was truly an unforgettable talent who continues to touch fans young and old all across the world.