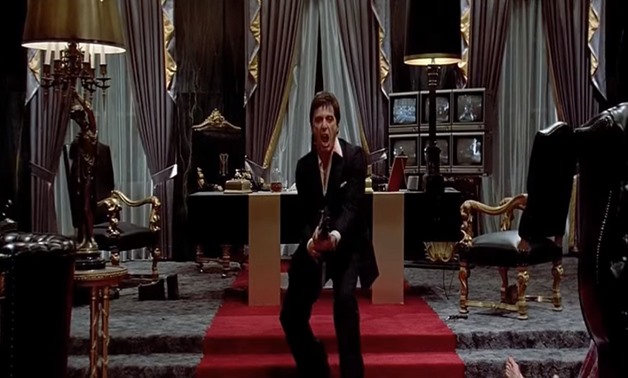 Screencap of Scarface from the iconic 'Say hello to my little friend' scene, December 9, 2017 – YouTube/Godlike

From director Brian De Palma, “Scarface” chronicles the rise and fall of Miami drug lord Tony Montana (Pacino), an immigrant from Cuba in the 1980s who arrives with his friend Manny Ribera (Steven Bauer) at the shores of the U.S., dreaming of a big life. He succeeds in taking over a drug cartel, but his time on the top soon comes to a crashing end as he succumbs to cocaine addiction, fueled by paranoia from his enemies who are out to get him.

“Scarface” was a loose remake of a 1932 gangster movie, which was based on the life of Al “Scarface” Pacino. The movie, starring Michelle Pfeiffer, Mary Elizabeth Mastrantonio and Robert Loggiathe, was nominated for three Golden Globe awards and has become a cult classic since its release. Originally the film was criticized for its graphic violence.