‘As If You See Him’: The Prophet’s teachings on stage 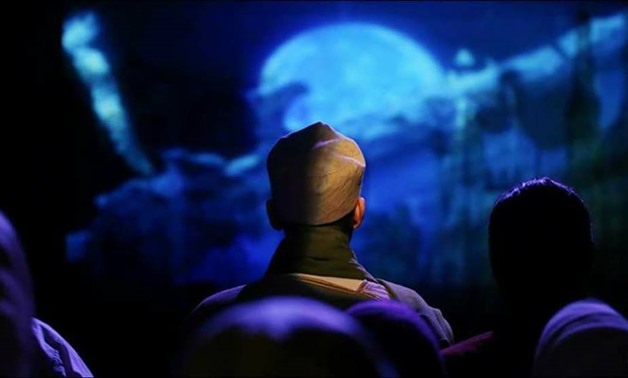 Scene from performance (“As If You See Him” official Facebook page)

CAIRO – 16 September 2017: In a beautiful performance last Wednesday at Al Taliaa Theater, the play called “Ka’anak Tarah” (As If You See Him) was staged. The play revolves around the value of love in today’s world with reference to Prophet Mohamed’s teachings.

The title is taken from one of the most famous hadith, or sayings, of the Prophet Mohamed, known the Jibril (Gabriel) hadith. “Him” in the title refers to God, urging us to act as though we see Him. The play is a daring attempt to criticize the negative behavior in our daily life, where religion is used to justify cheating, stealing, exploitation and even hatred towards others. The play emphasizes the shining examples in the Prophet’s life – the teachings promoting honesty, fairness and love towards fellow human beings.

The cast sings at the beginning of the performance and repeats the songs, alerting the audience to gather. Then the songs continue. The show starts by the return of the soul of Uwais el Qarny, one of those glorified in Islam and a contemporary of the Prophet, even though he did not see him; although, they were both aware of each other, recognized the good in their hearts and loved each other despite the physical distance between them.

Uwais was not able to travel to Medina where the Prophet lived, because he could not leave his blind mother. The beautiful persona of Islam did not participate in any wars, but was simply a believer in Islam’s message of love and the perfect emissary for Islam’s message of mercy.

The play is a series of sketches accompanied by music and poems that sound like they are coming from old Sufi heritage. In fact, they are made specifically for the show, recalling themes of loving the Prophet, praising his message and recognizing that he came with a peaceful affectionate message to all humans. The beautiful voices of the chorus help set the mood of the audience. Serenity was in the air and the whole audience was affected by the words and the beautiful voices.

The performance shows the lies that the poor sometimes use to beg and condemns that behavior. The play carries on in explaining that poverty is not an excuse, lying is a sin and honesty and hard work are a better way to live. Then the play later denounces the greed of the wealthy and their constant hunger to exploit general poverty for material gains.

Afterwards, it highlights that women are not merchandise and should be treated with respect. Finally, the show reaches its peak with a terrorist operation, where the whole society unifies to stop it.

The scorn towards these behaviors is depicted through the play, showing that religion respects life even with the sins and mistakes that we all commit in our lives. The direct message is acceptable in the context; there is no symbolism, but rather a straight forward lesson is given to the audience about how we can find the positive cored in negativity.

Theater techniques are developing in most plays in Egypt. In this particular play, the audio-visual, the decoration of the neighborhood that is shown through film material and the lights with the sounds, all collaborate together to break the barriers of time and place.

This fits with the theme of the return of Uwais from the past to the present, where youth use cell phones and take pictures with the holy man, all appearing natural and fitting.

The remarkable part about the play is the cast, made up of youth from all over the country, featuring amazing voices, acting, and singing. Most of them are performing on stage for the first time in their lives.