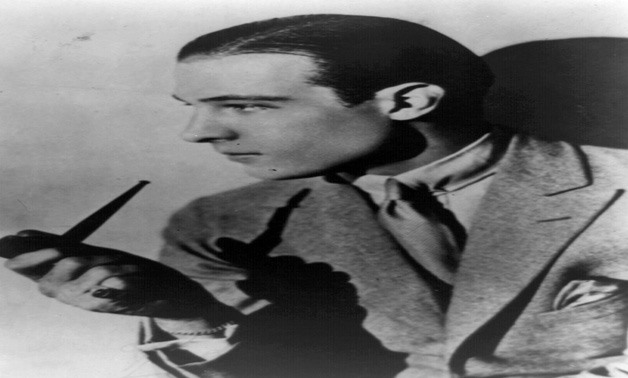 CAIRO – 23 August 2017: The death anniversary of early Hollywood star Rudolph Valentino falls on August 23. Valentino passed away in 1923 at the age of 31. Valentino was known as the 'Latin Lover', and adored by millions of women worldwide. He was also hailed as the silver screen's first male sex symbol.

Valentino was born in Italy, 1895 to humble roots. He did not start off in a life of fame or acting, and his first jobs involved working as a dishwasher, waiter and gardener.

Valentino attempted to join the army but was rejected, and by 1912 an unsuccessful move to Paris left him on the streets, homeless and without a job.

Things would quickly begin to turn for the luckless Valentino when, after heading to New York City, he wound up becoming a dancer at a night club. He was paid to dance with women who enjoyed the company of someone exotic. This would be the start of a new chapter in the immigrant's life, who took his interest in dancing to Hollywood in 1917. In that film, he starred as a dancer in the film ‘Alimony’.

This caught the eye of casting directors, and Valentino received small bit roles as a villain before finally landing his break in 1921's ‘The Four Horsemen of the Apocalypse’.
‘The Four Horsemen of the Apocalypse’ was a massive success and helped propel Valentino to stardom. Women could not get enough of Valentino's tango, and the actor landed roles in further romantic dramas, metamorphosing into the 'Latin Lover'.
Despite his romantic nature, Valentino was known for getting into rocky relationships.
One of the more humorous examples (though not for Valentino) involved him impulsively marrying star Jean Acker, who was homosexual and not actually interested in Valentino.
She reportedly locked the actor out of their hotel room, and the two separated.
One of Valentino's most iconic roles was in 1921's ‘The Sheikh’, a romance set in the Saharan desert where Valentino portrayed an Arab chief who falls in love with a western, "cultured" Englishwoman Agnes Ayres, who whisks her away into the heart of the Sahara. The film was such a hit that Valentino was on-board for the sequel 1926's 'The Son of the Sheikh', in what would be his final movie.

While promoting the movie, Valentino suddenly fell ill; a botched surgery days prior to treat ulcers and appendicitis led to an infection, which would spell the end for the Latin Lover. Valentino died after a week in hospital, surrounded by legions of adoring fans. His death was mourned nationwide, with thousands of mourners visiting the funeral home to pay respects to the departed star and crowds of many more laying flowers on his coffin.

Valentino's lasting legacy came in how he portrayed another side of the ideal man that women wanted. He portrayed a different kind of man from the rugged Anglo-Saxon American of the time. Though he was derided by jealous men as a sissy, today Valentino stands as a shining example of one of Hollywood's greatest lovers.