Part of the activities

CAIRO – 29 September 2022: A delegation from the South Korean Embassy and the United Nations Population Fund (UNFPA) conducted a field visit to one of the newly opened Population Awareness Clubs (PAC) in Sohag on September 28, 2022.

Sohag’s PAC is supported by Korea International Cooperation Agency (KOICA), the South Korean government agency that implements development cooperation, and operated by UNFPA in cooperation with the Ministry of Youth and Sports and Etijah, Youth and Development Consultancy Institute. PACs act as hubs for raising awareness on gender issues, through interactive and innovative methods such as music and theatre to communicate messages to the communities. 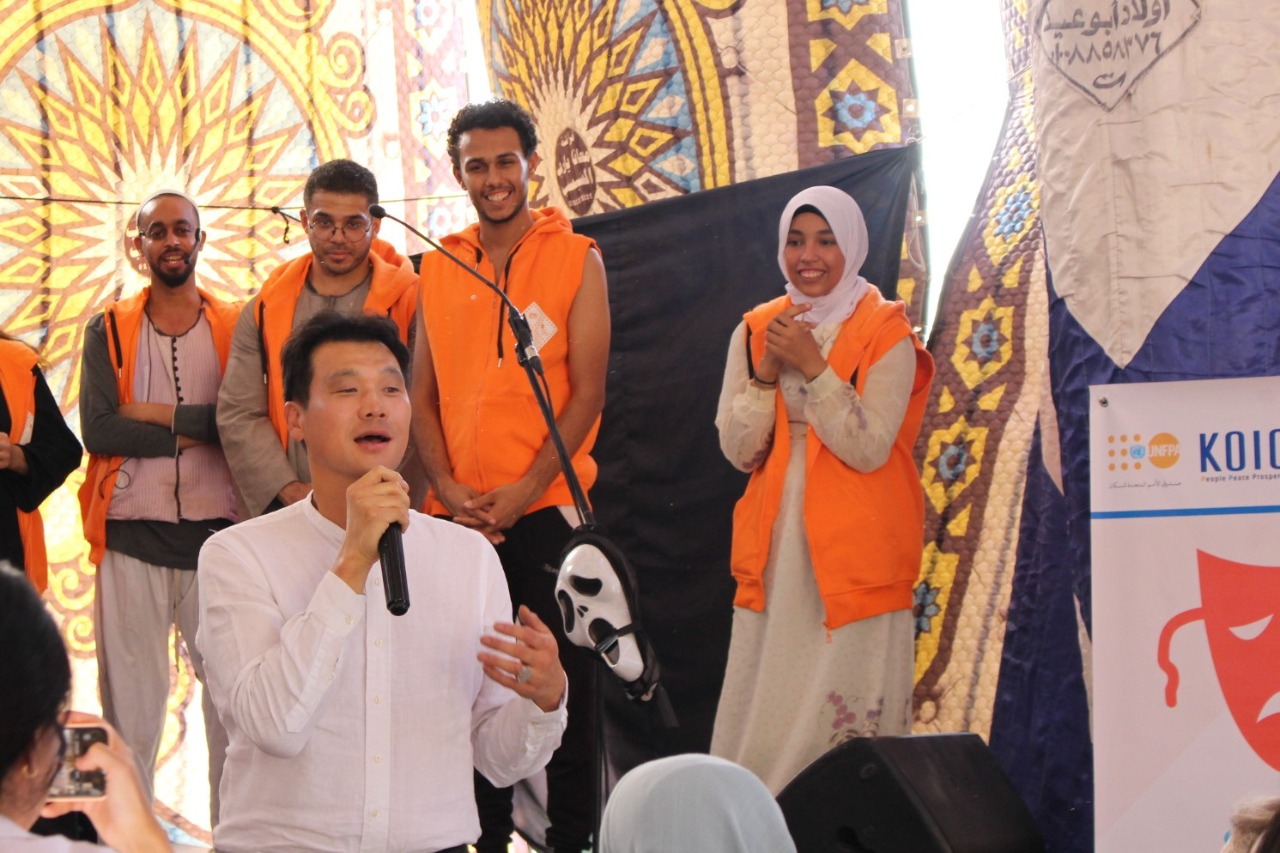 At Al Ahya Sharq Youth Centre, they attended a musical performance by young girls entitled “Shamandora” on early marriage and Female Genital Mutilation (FGM), followed by an interactive theater performance addressing Gender-Based Violence (GBV) and climate change. Those kinds of activities engage with the whole community through interactive means to empower women and discuss challenges that women and girls face in society including harmful practices and behaviors. It also addresses the life-threatening disasters caused by climate changes that the whole villagers face such as hot temperature, fires, floods and etc. The lyrics, music, and script were written by the young girls and reflected their own lives.

“I’m still a little child, I dream of running and living. My dream has no limits, and this universe is not enough for me. My dream is not a wedding and a song, or even a ring in my hand. Why should I take responsibility in such young age? And let the world narrow down on me? ” read the lyrics to one of the songs performed by the young girls. This activity comes as part of the “Noura”, Girls Assets Framework Program, which is under the sponsorship of H.E. Mrs. Entissar El Sisi and is being implemented by UNFPA in cooperation with the National Council for Women. Through the program, young girls will gain better access to health, social, and educational assets to achieve a better future for themselves. KOICA is willingly contributing to the program under the name of “Project for Preventing and Combating Gender-Based Violence in Egypt” (21’-24’ / $4.0M), with other significant activities such as creating safe spaces for GBV survivors, expanding anti-violence against women units in universities and hospitals, and conducting different kinds of awareness-raising programs.

H.E. Amb. Jin Wook Hong said “Today marks my last stop in my visit to Minya, Assiut and Sohag, but your performance today will be the most memorable. I was very touched that you tried to think of a solution and prepared this beautiful play.”

He assured “Korea and Egypt still have a long way ahead of them in solving women’s issues. But if the young generation continue their efforts to solve such problems, a bright future will definitely come. Korea as a friend to Egypt, will always stand by and help the Egyptian government with the cooperation with the UNFPA.”

From her side Ms. Frederika Meijer, UNFPA Representative in Egypt, highlighted the importance of empowering young people and mobilizing them to achieve the 2030 agenda. “Today's generation of youth in Egypt is also impressive. 60 percent of Egypt’s population is under the age of 30, and there is definitely strength in those numbers,” she said, “It is only natural that we rely on them, and empower them, to become agents of change in their communities.”

Mrs. Jinyoung Kim highlighted “KOICA is one of the like-minded partners of UNFPA and the local partners, who support Noura Program. I was very proud witnessing all the efforts you have put in today’s performance. Being a Gender Champion myself, I see this as a new beginning for my career here, and I will do my best to support all of you on women’s issues and climate change.” Meanwhile, Dr. Ahmed Samy, Sohag Deputy Governor encouraged “Egypt is currently working on gender issues and we will continue to expand our efforts in line with the presidential initiative Decent Life, and with the support of the Korean government and UNFPA.”

Mr. Yousry Kafafi, Undersecretary of the Directorate of Youth and Sports in Sohag commented “The theater performance was brilliant and discussed some significant and modern issues we are facing today. We’re hoping that the support given to this Youth Center will reach to support the other Youth Centers in Sohag in particular, and other governorates as well.”

The performance director commented “What really amazes me is the enthusiasm of the young people and their dedication and how they stand against their conservative communities who oppose the participation of girls in such activities.”

From an interview with the participants “I was nervous at first because I knew that foreigners will be attending the play but I was so excited at the same time to convey my feelings and our message to everyone. The teamwork was amazing and it encouraged me more to perform my best to deliver our messages and thoughts.”

“I liked how the performance was discussing three different stories, and how the girls were asking for their rights.” One of the observers commented.

The Korean Government will take this opportunity to strengthen its efforts to work with the Egyptian Government to promote gender equality and achieve zero gender-based violence in Egypt.