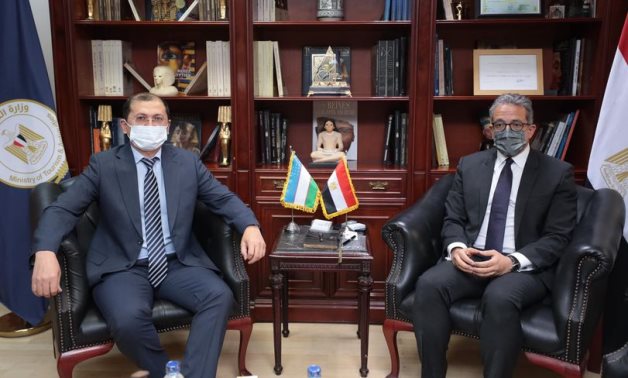 The meeting was also attended by the cultural attaché of the Embassy of Uzbekistan, and the general supervisor of the General Department of International Relations and Agreements at the Ministry of Tourism and Antiquities.

During the meeting, ways to enhance bilateral cooperation in the fields of tourism and archaeology, and ways to further increase inbound tourism from Uzbekistan were discussed.

It is worth noting that inbound tourism to Egypt from Uzbekistan increased threefold in 2021, compared to 2019.

The two sides also reviewed ways to increase the number of flights between Egypt and Uzbekistan. Four airlines are currently operating flights between the two countries.

For his part, the ambassador noted that Egypt comes among the top 3 tourist destinations that Uzbek tourists prefer to visit, highlighting the strength of the decades-long ties between the governments and peoples of the two countries, and expressing his country's desire to benefit from the Egyptian expertise in the fields of tourism, antiquities and museums.

Additionally, Minister Enani and Ambassador Kilichev agreed to hold a number of workshops in the field of hospitality, antiquities and museums, in addition to holding extensive meetings in the upcoming period between the two sides.

The first meeting will be attended by a number of tourism experts and representatives of the Egyptian Federation of Tourism Chambers and their Uzbekistani counterparts, with the aim of presenting the Egyptian experiences in the field of tourism and discussing ways to promote Uzbekistani tourist movement to Egypt.

In the second meeting, a number of antiquities experts and leaders of the Supreme Council of Antiquities will convene with their Uzbekistani counterparts, to review the Egyptian experiences in the field of museums and scientific study of antiquities.