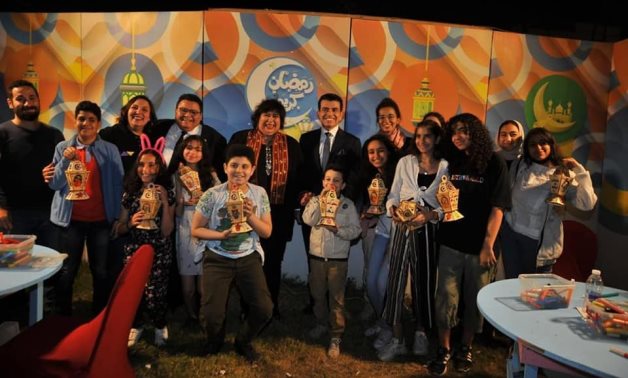 Egypt's culture min. during some of the festive activities - Facebook/Min. of Culture

CAIRO – 12 April 2022: The Ramadan Festival “Hal Helalak” [Your Crescent is Here], which is supervised by the Cultural Production Affairs Sector, was launched in the Egyptian Opera House on April 11.

The launching ceremony was held in the presence of Egypt’s Minister of Culture Inas Abdel Dayem, Director of ICESCO Salem bin Mohammad Al-Malik, and Head of the Cultural Production Affairs Sector Khaled Galal.

Galal said that the sector has been keen to present the festival for six years due to its artistic addition in the month of Ramadan, as it lasts for fifteen days and includes various artistic segments.

Moreover, Galal further stated that the Cultural Production Affairs Sector is keen every year to honor the soldiers of the October War because of the great impact of the war on various Egyptian generations, as it was the war that brought the Egyptians together under the banner of victory.

In the midst of a large crowd, the El-Hanager Theater at the Opera House witnessed the honoring of a number of October War soldiers, while one of the honored soldiers of the October War sang a poem in the vernacular language, praising the efforts of the Minister of Culture Inas Abdel Dayem, amid the applause of the audience.

The Minister of Culture Inas Abdel Dayem, and ICESCO Director Salem bin Mohammad Al-Malik handed the honored soldiers certificates of appreciation, amid a warm greeting from those who attended the ceremony.