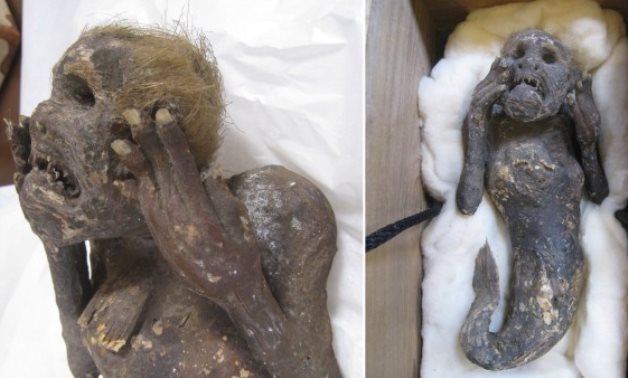 CAIRO – 9 March 2022: A scientific team in Japan published a report explaining that mermaids are real.

This came after a 300-year-old mummified mermaid measuring 12 inches (30.48 cm) was found in the Pacific Ocean, off the Japanese island of Shikoku. The mummified mermaid is now housed in a temple in Asakuchi City. The upper half of the creature is distinguished by a hairy head, a crooked face, and pointed teeth. Its foot resembles a fish tail.

To understand more about the creature's origins, a team of scientists from Kurashiki University of Science and Arts, a private university in Kurashiki, Okayama, Japan, recently conducted a CT scan of the body.

According to a report published in The Independent, "the strange creature could have religious significance," claims Hiroshi Kinoshita of the Okayama Folklore Society who was the mastermind of the new research project.

In Japanese mythology, mermaids are associated with immortality. Japanese folklore explained that ancient myths include the story of Yao Baekuni and Ningyo (a human fish or mermaid). In this myth, a fisherman from Wakasa province caught an unusual fish and forgot to throw the evil fish. She lived to be 800 years old, and everyone who ate mermaid meat lived longer, but fishing Ningyo was believed to bring storms and misfortune.