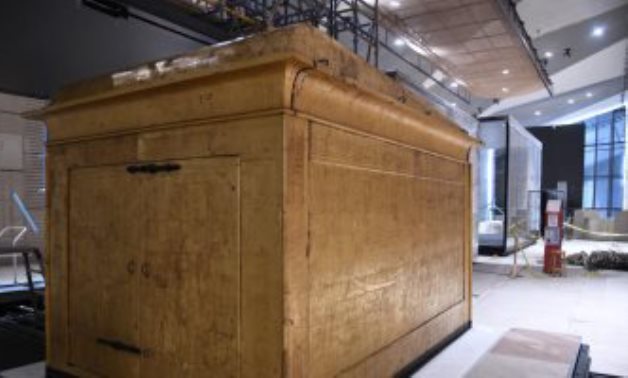 CAIRO – 17 May 2021: Restorers and archaeologists in the Grand Egyptian Museum were able to complete the installation of the third shrine of the Golden King, Tutankhamen, which the museum has recently received.

The shrine is displayed in the place designated for it with the rest of the shrines in the king’s hall among his holdings that exceed 5600 pieces.

The installation of the shrine took about 14 hours of meticulous work. The restorers removed the protective layers from the walls of the shrine, which were used for protection during the transport process. The necessary cleaning work for all the gilded surfaces was also completed.

The shrine’s ceiling is decorated with a winged sun disk and eight birds placed underneath the titles of the king, and depicts inscriptions from the inside. The shrine also shows a gate with inscriptions and texts from the Book of the Dead

The first and second shrines of Tutankhamun are yet to be transferred to the Grand Egyptian Museum, to be installed in their designated location.

Scientific documentation of the two shrines has been completed, including x-ray radiography, photography and video, and a comprehensive report on the condition of each cabin has been prepared. The reports aid in the process of disassembling and reassembling the shrines.

The first shrine is the largest among the artifacts of King Tutankhamun’s possessions, with dimensions of 20.540 × 370 × 2 m and weighing 2,600 kilograms.