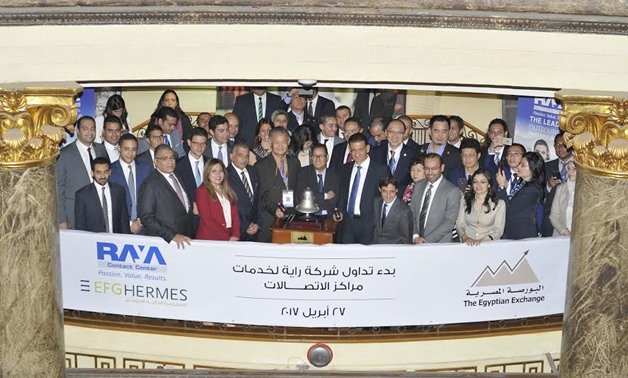 Cairo, 27 April 2017: Shares in Egypt’s outsourcing firm Raya Contact Center S.A.E began trading this morning at 10:00 in the Egyptian Exchange (EGX), opening at EGP16.7 ($0.9) per share under the stock code RACC.CA, the EGX said statement.
Raya’s IPO is third in the EGX since the beginning of 2017. The company sold a 49 percent stake to investors, and its private placement was oversubscribed four times before closing on April 12.

“In a new step reflecting the success of the EGX’s management efforts in attracting new companies, the EGX trading platform has welcomed its third visitor this year, namely Raya Contact Centers; it is the highest value IPO compared to the previous two IPOs executed during the first four months of the year,” said Dr. Mohamed Omran, EGX Chairman.

“The high momentum of the IPOs during the first four months of this year reflects the efforts of the EGX’s management in this regard. The value of the IPOs executed earlier this year amounted to EGP1.5 billion and represent about 65 percent of the total value of the executed IPOs during 2016,” Omran added.
In 2016, the EGX concluded five IPOs with a total value of EGP2.3 billion.
“We expect the current pace of IPOs to continue during the year, with seven companies working on completing the required documents in a step toward commencing their IPOs and trading,” added Omran.

RRC Chief Executive Officer Ahmed Imam commented saying, “As we take our first steps this morning as an EGX listed company, we appreciate the effort exerted by the EFG Hermes, Zaki Hashem & Partners, E&Y and Grant Thornton teams. We look forward in the coming years to continue growing our company and maximizing value for our shareholders.”

Mostafa Gad, Co-Head of Investment Banking at EFG Hermes, said: “We are proud to have built a quality book of global institutional investors for RCC’s shares through our superior reach and unrivaled track record in the local market. Strong institutional investor interest in Egyptian equities reflects the fundamental attractiveness of the macro themes driving growth in Egypt,” Gad continued.