How to regain Egypt’s cotton glory?

In a seminar organized by the Federation of Egyptian industries’ Textile Industries Chamber, he said that there is a plan to expand cotton production in the next five years to reach 220,000 tons through cultivating 515,000 feddans.

Cultivation of cotton dwindled significantly during the last years, declining from eight million qintar 15 years ago to 670,000 qintar in the last season, said Ahmed Mostafa, Chairman of the Holding Company for Cotton, Spinning and Weaving, during the seminar.

Negm said that Egypt’s production of cotton increased this year as a result of cultivating an extra 90,000 feddans, as part of the Agriculture Ministry’s plan to increase cotton production and Egyptian exports abroad.

He added that a comprehensive strategy is now in place to place the Egyptian cotton once again on the global competitiveness map and reach a bigger number of international markets. Egypt is currently exporting to more than 24 countries.

Some 97.5 percent of the global cotton industry uses short and medium staple cotton, whereas only 2.5 percent relies on long staple cotton, said Mohamed el-Morshedy, Chairman of the Textile Industries Chamber during the seminar.

For this reason, he stressed on the importance of expanding the production of new strains of cotton in order to cope with the developments in the global textiles industry.
Egypt’s cotton industry has been suffering in the past years due to years of neglect and government spending cuts.

Until the 1980s, Egypt cultivated as much as half a million hectares (1.2 million feddans) of cotton a year to meet global demand for world-class Egyptian cotton. 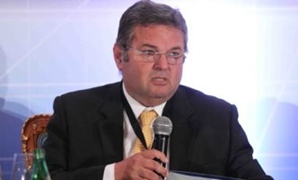