By: Egypt Today staff
CAIRO – 20 February 2020: A state of controversy has struck Ankara after a US tank report suggested a new military coup was likely to be orchestrated against Recep Tayyip Erdogan.

The report by prominent think tank RAND Corporation, regarding Turkey’s foreign policy, also hinted that the Turkish defense minister was extremely close to the US military.

Huge discontent has been piling up in the Turkish military, especially following the expulsion of hundreds of officers after an alleged coup attempt in 2016.

Mid-level officers are reported to be extremely frustrated with the military leadership and concerned about being removed in the continuing post-coup purges, according to the report.

“This discontent could even lead to another coup attempt at some point, and Erdogan appears to take the threat seriously,” the report said.

“Throughout this turmoil, Akar has remained a key interlocutor for the US and other foreign militaries,” the report added.

Akar’s retention of his position as a Turkish General Staff chief in 2017 and subsequent appointment as minister of defense in July 2018 in the first presidential decree under the new executive presidential system suggest that he will continue to be the leading figure in Turkish defense affairs for some time.

The report also claimed that the Erdogan government had established the National Defense University as the ultimate educational body for the military after the coup attempt in order “to break down the Turkish military’s insular culture as guardians of secularism”.

Erdogan delved into the issue over the weekend. Without directly talking about the report, the president said that the Turkish people’s resistance to the 2016 coup attempt should be a lesson for everyone.

“Our people have earned a great and serious experience,” he told journalists. “Next time they won’t even question whether to go out. Everyone will pour out to the squares.”

For his part, AKP spokesperson Omer Celik has said “The state apparatus is on the alert and has proven to be loyal to democracy.”

Erdogan’s nationalist partner Devlet Bahseli, has also said “The rumor of the coup is ingratitude to the people. If there are some who are planning a coup and want to turn their guns on the people they should know that they will not succeed unless they shed the blood of the 82 million Turks!”

After several weeks of silence, the Turkish defense ministry said the report was unreasonably ambiguous and the comments referring to the Turkish military were baseless and not serious.

“We are saddened to see that some expressions in the report have been consciously, or unconsciously, twisted and used in the country,” the statement said. 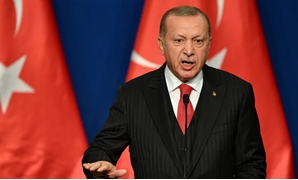