By: Egypt Today staff
CAIRO – 19 June 2017: Qatar’s choice to offer citizenship to athletes so they can play under the Qatari national flag has drawn increasing criticism after a report released by ‘Qatari Leaks’ Monday.

“Megalomania motivates Qatar’s royal family” in fields ranging from sports to politics, the website said, adding that Doha is “proud” of its naturalization policies, through which Qatar can ”purchase” talented sports players from all over the world, the website added.

Qatar does not care whether such players are Arab nationals, speak Arabic or share national dreams and beliefs with the Qatari people or not, Qatari Leaks noted.

In 1981, the Qatari football team impressed the world when it beat Britain and Brazil in the World Cup for Youth, although they were defeated by West Germany in the final match. At that time, the team was comprised entirely of players born Qatari.

Today, however, the situation is very different. Qatar’s naturalization policies have led to ethnic Qataris comprising only a small part of the populations. According to a 2015 estimate by the CIA World Fact Book, ethnic Qataris represent only 11.6 percent of Qatar’s population.

Qatar has “become a mockery” now that most of its national teams are comprised of naturalized foreigners, Qatar Leaks reported. Many Arab writers have criticizes Qatar over the policy.

Qatari former Emir Hamad bin Khalifa, and his son, Tamim, who now rules the country, have endorsed the naturalization policy. Qatari Leaks, however, argues that the policy may not be working: Qatar’s national team has not been able to win the Asia Cup, which Qatar has hosted twice, in 1988 and 2011. The website also argued that Qatar’s performance is not as good as its neighbors, such as Saudi Arabia, whose teams have played well without naturalizing players. 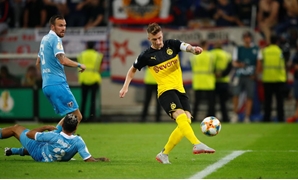